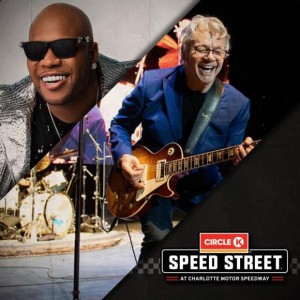 CONCORD, N.C. (News Release) — Charlotte Motor Speedway will be THE place to be this Memorial Day weekend, as America’s Home for Racing becomes the new home of Circle K Speed Street, a decades-old tradition that celebrates music, motorsports and more.

From May 27-29, Circle K Speed Street will amplify Concord’s unrivaled fun and excitement – bringing A-list music acts, driver appearances, interactive games and displays and a bevy of entertainment to the heart of motorsports country.

“The pandemic gave us a great opportunity to look at Speed Street in an effort to reinvent the experience and bring even more entertainment to the fans,” said Jay Howard, executive director of the 600 Festival, the nonprofit organization that, along with his team at CSM Production, has produced Speed Street for more than 25 years. “As we invest in growing the festival to make it an even bigger draw, working alongside our partners Charlotte Motor Speedway to create a one-stop-party-spot on Memorial Day weekend, just makes a lot of sense.”

Grammy-nominated rapper Flo Rida will kick off this year’s music and motorsports celebration on Friday, May 27, while legendary rock group Steve Miller Band will take the stage Saturday, May 28 from the largest production stage ever constructed in the fan area outside of Turn One.

Four-time Grammy-nominated rapper Flo Rida will kick off the Memorial Day Weekend music festivities with a 75-mintue performance featuring internationally acclaimed hits like “Low,” “Right Round” and “My House.”

Saturday at Circle K Speed Street belongs to the classic rock fans, with Steve Miller Band taking the stage to entertain fans with a musical collection of instantly recognizable songs spanning the group’s five decades of music. The 90-minute set will feature fan favorites like “The Joker,” “Take the Money and Run,” “Fly Like an Eagle,” “Jet Airliner” and “Jungle Love.”

In addition to A-list music acts on the Circle K Speed Street stage each day, the 10-acre fan zone will include driver appearances by some of NASCAR’s biggest names, interactive games and displays, food trucks, souvenir haulers, partner activations and more. Additional details on entertainment, schedules and attractions will be forthcoming.

“The Coca-Cola 600 has always been so much more than just a race; it’s an event in every sense of the word,” said Greg Walter, executive vice president and general manager at Charlotte Motor Speedway. “With the addition of Circle K Speed Street to our action-packed weekend schedule – and huge acts that span a variety of musical styles – we mean what we say that there is truly something here for everyone to enjoy.”

Circle K Speed Street will be open each day to fans with a ticket to any of the weekend’s three NASCAR events May 27-29, including Friday’s North Carolina Education Lottery 200, Saturday’s Alsco Uniforms 300 or Sunday’s Cola-Cola 600.

Single-day tickets for Speed Street access will also be available for just $20. Tickets to the Coca-Cola 600 start at just $49 for adults. Kids 12 and under get in for just $10 with an adult.