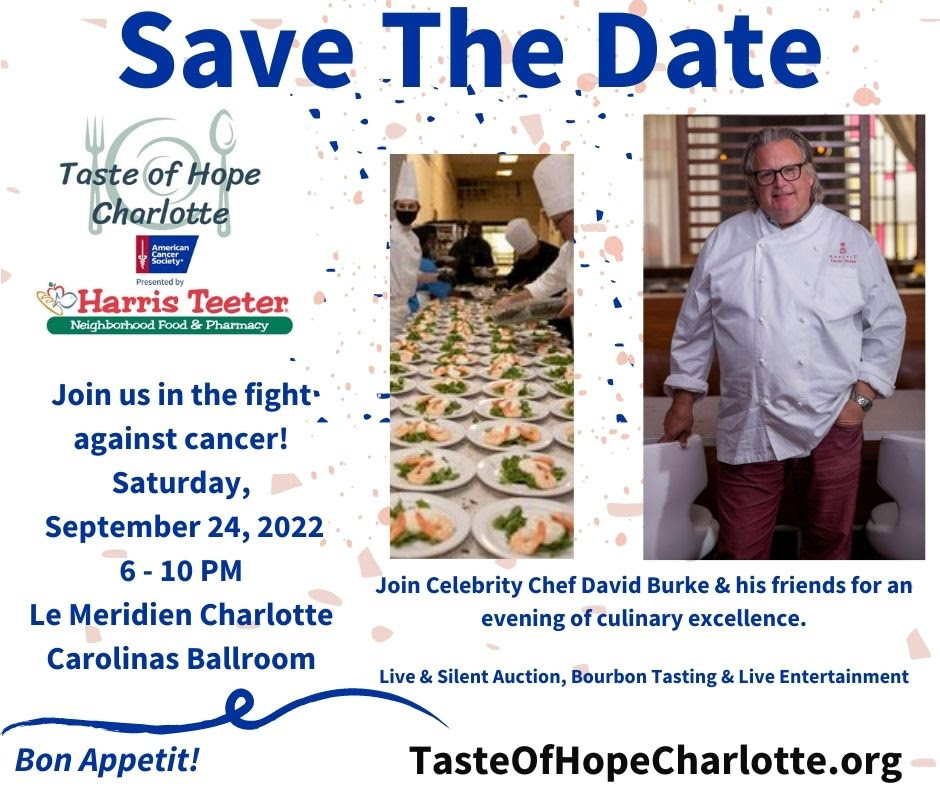 “As Charlotte’s premier grocer, Harris Teeter is committed to supporting community-based initiatives that represent our valued associates and what matters most to them,” said Danna Robinson, communication manager for Harris Teeter and Mission Chair for Taste of Hope Charlotte. “Last year we pivoted from the former gala format and capitalized on Charlotte’s culinary institutions to showcase insights on food preparation, created an opportunity for local culinary students to showcase their skills, and brought about an entertaining evening with celebrity chef David Burke. The gala’s name says it all, Taste of Hope, which supports ACS’s life-saving mission and aligns with Harris Teeter’s commitment to providing the freshest, quality ingredients to our shoppers as well as supports our corporate culture of supporting the communities we serve.”

“Having a partner who is well known in the community is just the beginning of a great foundation for this ‘foodie’ fundraiser,” said Mel Toran, executive director of the American Cancer Society in western North Carolina and South Carolina. “Harris Teeter has been a wonderful partner for many of our Charlotte regional events and contributed more than $680,000 to the American Cancer Society in 2021. Being affiliated with Harris Teeter’s brand is a win-win for us.”

Chef David Burke and his Charlotte restaurant, Red Salt by David Burke, will host the September 24th four-course ensemble. Burke is one of the best-known and most respected chefs in modern American cuisine.

Acknowledged as a leading pioneer in American cooking, Burke, a New Jersey native, is also recognized internationally for his revolutionary techniques, exceptional skills, successful restaurant empire and his many TV appearances. In the parlance of today’s celebrity-driven culture, he is a rock star of the culinary world. The Taste of Hope Charlotte gala presented by Harris Teeter will be Saturday, September 24, at Le Meridien Charlotte (555 So. McDowell St). Reception and live auction preview open at 6 p.m. with the culinary experience at 7 p.m.

Sponsorship and underwriting opportunities are available by going to the link Taste Of Hope Charlotte.