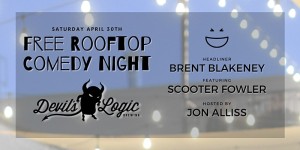 Officials say doors open at 7 p.m. for the event and seating is first come, first served.

Comedian Brent Blakeney of Raleigh, N.C. will headline the first night of the free series.

Officials say Blakeney has been practicing his craft since 2011 and has worked with some of the biggest names in the industry including Brian Regan, Bill Burr, and Iliza Shelsinger.

In 2015, officials say Blakeney was picked to be the featured opener for “Last Comic Standing” winner Jon Reep.

Blakeney was also voted “Best of Fest” at the SLO Comedy Festival in San Luis Obispo, California, as well as he won the “North Carolina’s Funniest” competition.

Officials say he also filmed his first TV comedy set and it will premiere on the Circle Network in early 2020.