HAVANA (AP) — Search crews with dogs are hunting through the ruins of a luxury hotel in Cuba’s capital for survivors of an apparent gas explosion and officials have raised the number of known dead to 30.

The five-star Hotel Saratoga in Old Havana was preparing to reopen after being closed for two years when an apparent gas leak caused a massive explosion on Friday.

Cuban officials on Sunday raised the known death toll to 30 from 27 even as crews continued to search for victims.

The blast damaged nearby structures, including the historic Marti Theater and the Calvary Baptist Church.

It’s the headquarters for the denomination in western Cuba.

HAVANA (AP) — Rescuers in Cuba’s capital are still hunting for survivors in the ruins of a luxury hotel that was shattered by an explosion that killed at least 25 people and injured more than 60.

A natural gas leak was the apparent cause of Friday’s blast at Havana’s 96-room Hotel Saratoga.

The 19th-century structure in the city’s Old Havana neighborhood did not have any guests at the time of the explosion because it was undergoing renovations ahead of a planned Tuesday reopening.

Relatives of missing people have gathered as rescuers use dogs to hunt for victims and survivors.

Others gathered at hospitals where the injured are being treated. 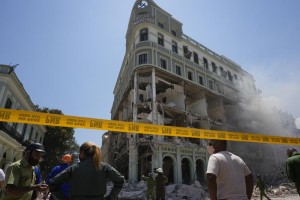 The five-star Hotel Saratoga is heavily damaged after an explosion in Old Havana, Cuba, Friday, May 6, 2022. (AP Photo/Ramon Espinosa)

HAVANA — A powerful explosion apparently caused by a gas leak has blown away much of the outer walls from a five-star hotel in the heart of Cuba’s capital, and officials report at least eight people have died.

But no tourists were lodged at the 96-room Hotel Saratoga because it was undergoing renovations.

Officials say about a dozen people are missing and searchers are hunting for anyone trapped.

A school next door was evacuated after the blast and no pupils were reported hurt.