Warhol’s ‘Marilyn’ Auction Nabs $195M; Most For US Artist 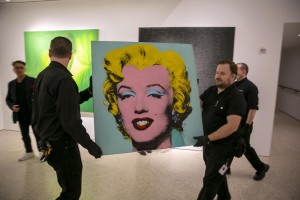 The 1964 painting Shot Sage Blue Marilyn by Andy Warhol is carried in Christie’s showroom in New York City on Sunday, May 8, 2022. The auction house predicts it will sell for $200 million on Monday, becoming the most expensive 20th-century artwork to sell at auction. (AP Photo/Ted Shaffrey)

That makes the iconic portrait of actress Marilyn Monroe the most expensive work by a U.S. artist ever auctioned.

Christie’s said an unknown buyer made the purchase.

When the auction was announced, they had estimated it could go for as much as $200 million.

The Warhol piece has unseated the previous record-holder: another modern master, Jean-Michel Basquiat.