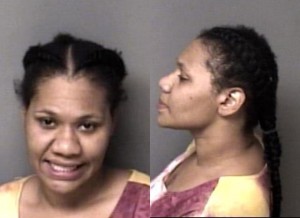 GASTON COUNTY, N.C. — A Bessemer City woman is facing multiple charges, including DWI, after a serious collision involving a motorcycle Tuesday afternoon, according to the Gastonia Police Department.

Police officers, along with fire and rescue personnel, responded to Highway 321 near Roechling Street around 2 p.m. after a report of the crash.

The motorcycle and the Subaru collided near the intersection, police say. Soon after the collision, the motorcycle caught fire.

The unidentified motorcycle driver was transported to a hospital with serious injuries.

Officers determined that Lawrence had a warrant for her arrest and that she was DWI.

According to officers, Lawrence was arrested and transported to the Gaston County Jail where she was charged with DWI, felony serious injury by vehicle, and unsafe movement.