Win a four-pack of tickets to Charlotte Independence vs Forward Madison on Sunday, June 26th 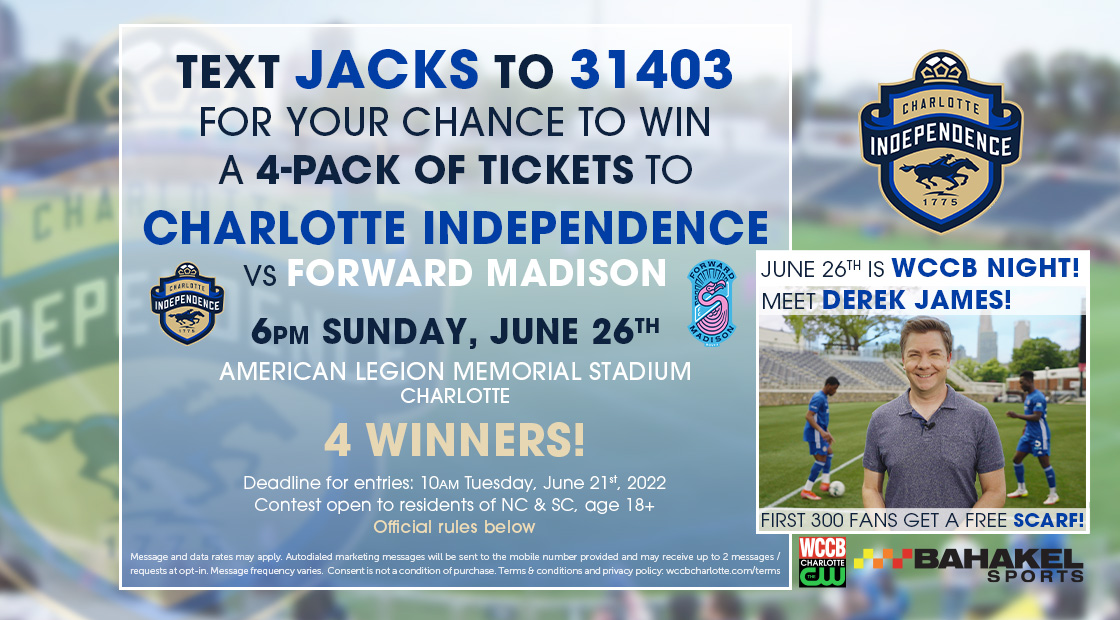 This contest has now closed. Winners will have received instructions on how to claim their prize which must be claimed by 12 PM / noon Friday, June 24th.

The game versus Forward Madison will also see WCCB’s own Derek James in attendance, plus the first 300 fans through the gate will receive a free scarf – presented by Queen City Audio Video & Appliance! So make sure to arrive early. The match kicks off at 6pm. Click here for more details about WCCB Night.

Need tickets? WCCB viewers can get 20% off when using this link to buy tickets to the game!

4 Winners: Four winners will each receive a four-pack of tickets to the Charlotte Independence vs Forward Madison USL League 1 game on Sunday, June 26th at 6pm (ARV $38 per ticket, $152 per four-pack).

HOW TO WIN: No purchase necessary.

Viewers must text the word “JACKS” to 31403 to enter.
Deadline for entries is 10 AM Tuesday, June 21, 2022.
Winners will be randomly selected at 10 AM and sent a confirmation text detailing how to claim the prize.

Do not come to the station unless instructed to do so.

ELIGIBILITY: No purchase necessary. To win, you must be 18 years or older and a legal resident of North or South Carolina. No employee of the Charlotte Independence and their affiliated artists and promoters (“Sponsor”), or WCCB-TV (“Station”), their affiliated companies, his or her spouse, or immediate family members and/or those living in the same household of each shall be eligible to win. Immediate family members include, but are not necessarily limited to, parents, brothers, sisters, nieces, nephews, aunts, uncles, cousins, and grandparents. Employees, or relatives of employees, of any television or radio station in the Charlotte Nielsen DMA or Charlotte Arbitron ADI are not eligible to win. Additionally, Station reserves the right to disqualify any other person from participation in the Contest where such participation would, in the sole opinion of Station, compromise or give the appearance of compromising the integrity of the Contest. No person shall be eligible to win any contest conducted by the Station more than one time in any sixty-day period.

6) Winners will be notified by text with instructions on how to claim the prize no later than an hour after the contest closes (“deadline for entries”). Do not come to the station unless instructed to do so. Prize must be claimed by 12 PM Friday, June 24th, 2022 or risk forfeit.