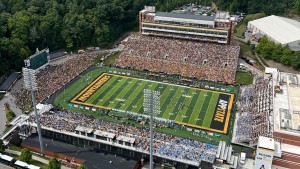 Appearing in the High Country for the first time, the popular college football pregame show will be on campus next weekend, on Saturday, Sept. 17, for App State’s Sun Belt Conference opener against Troy. Kickoff, subject to change, is currently scheduled for 3:30 p.m.

“This is what we’ve been working for since we made the transition to FBS,” App State Director of Athletics Doug Gillin said. “This is a special opportunity to showcase our university, community and football program to a national audience.”

Stay tuned to appstatesports.com and App State’s social media platforms for more details on the exact location and other info.

The Mountaineers will head into their league opener fresh off a 17-14 win at No. 6 Texas A&M. It was the program’s first win against a top-10 opponent since the 34-32 victory against No. 5 Michigan in 2007, when App State was an FCS power, and that nationally televised victory followed a home opener in which Kidd Brewer Stadium had a record 40,168 fans for a high-scoring thriller between the Mountaineers and North Carolina.

Now in its eighth season at the FBS level, App State has won four Sun Belt titles and six bowl games. The Mountaineers are 80-20 in their last 100 games.

Rece Davis leads the show in his eighth season as host. He is joined at the desk by GameDay analysts Desmond Howard, Kirk Herbstreit, Lee Corso and David Pollack and reporters Jen Lada, Gene Wojciechowski and newcomer Jess Sims. Senior research producer Chris ‘The Bear’ Fallica and college football insider Pete Thamel round out the GameDay crew for the season.