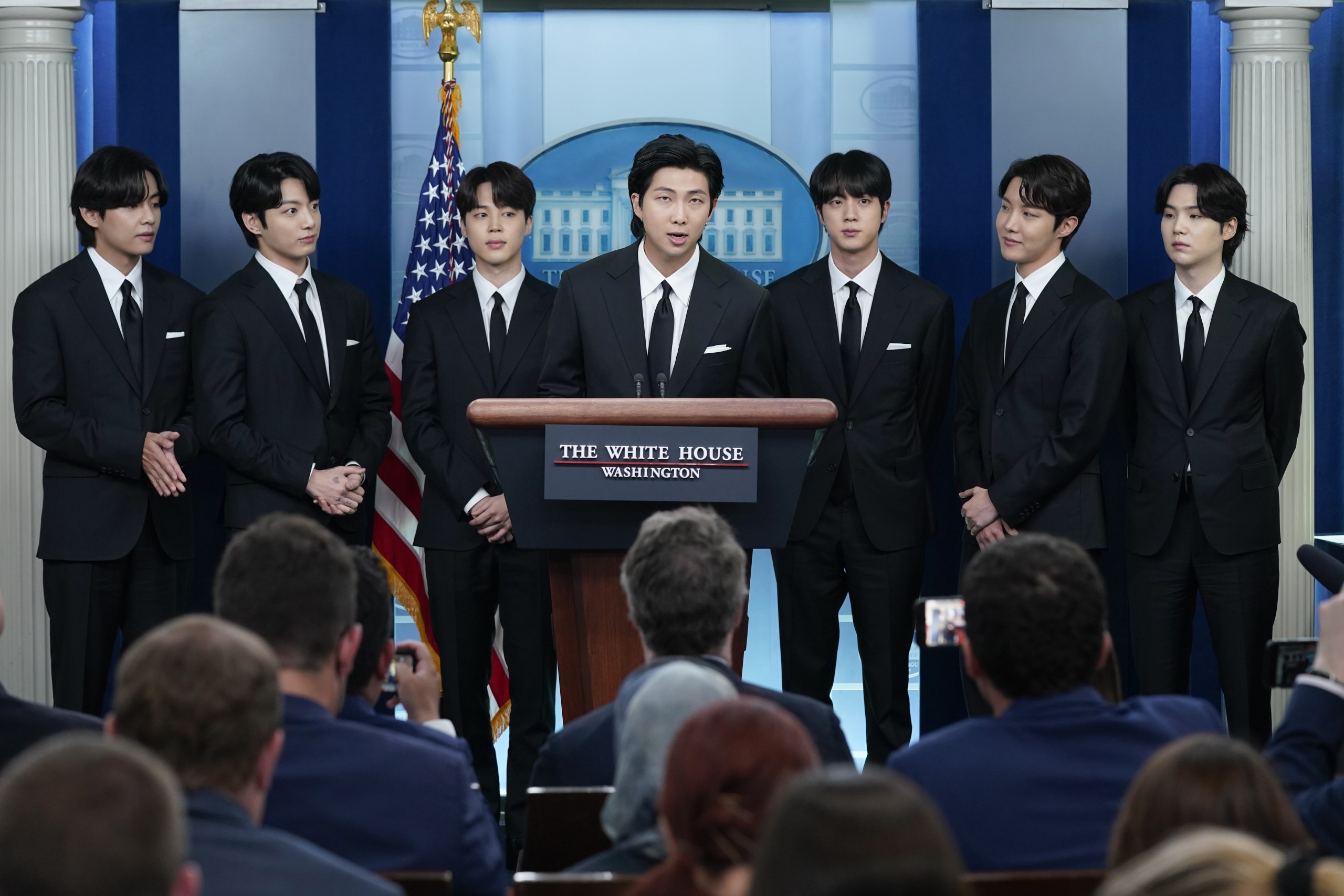 FILE – RM, center, accompanied by other K-pop supergroup BTS members from left, V, Jungkook, Jimin, Jin, J-Hope, and Suga speaks during the daily briefing at the White House in Washington, Tuesday, May 31, 2022. The members of K-pop band BTS will serve their mandatory military duties under South Korean law, their management company said Monday, Oct. 17, 2022, effectively ending a debate on exempting them because of their artistic accomplishments. (AP Photo/Evan Vucci, File)

SEOUL, South Korea (AP) — The members of K-pop band BTS will serve their mandatory military duties under South Korean law, their management company said Monday, effectively ending a debate on whether they should be granted exemptions because of their artistic accomplishments.

Big Hit Music said the band’s oldest member, Jin, will revoke his request to delay his conscription at the end of the month and undertake the required steps. The six other BTS members also plan to serve in the military and are “looking forward to reconvening as a group again around 2025 following their service commitment,” the company said in a statement.

No further information on the timing of their service was given. The band members performed together in Busan over the weekend in support of the city’s EXPO bid, which will be their last concert as a group until they finish serving in the military, according to their label.

Hybe Corp., the parent company of Big Hit, said in an email to The Associated Press that each member of the band for the time being will focus on individual activities scheduled around their military service plans.

In a letter to shareholders, Hybe CEO Park Jiwon downplayed financial concerns related to the BTS hiatus, saying it has a broad enough lineup of artists, including other popular K-pop groups such as Le Sserafim and NewJeans and Western performers Justin Bieber and Ariana Grande.

“We have always been aware of the eventuality of mandatory military service, and we have long been making preparations to be ready for this moment,” Park wrote. “In the short term, individual activities for several of the members are planned into the first half of 2023, and we have secured content in advance, which will enable BTS to continue their engagement with fans for the foreseeable future.”

The announcement came after Lee Ki Sik, commissioner of the Military Manpower Administration, told lawmakers this month that it would be “desirable” for BTS members to fulfil their military duties to ensure fairness in the country’s military service.

After enlisting, Jin and other BTS members will receive five weeks of combat training before being assigned to specific units and duties, according to officials at the Military Manpower Administration, who stressed that the singers would go under the same process as other South Korean men.

While South Korea’s military for years had assigned enlisted entertainers to duties related to producing radio and TV material promoting the military, the “entertainment soldier” system was retired in 2013 following complaints over fairness.

Defense Minister Lee Jong-sup said in August that if BTS members join the military, they would likely be allowed to continue practicing and to join with the group for tours overseas.

Whether the BTS members must serve in the army had been a hotly debated issue in South Korea as Jin faced possible enlistment early next year. Jin turns 30 in December, the age at which men can no longer delay enlistment. Other members are currently between 25 and 29 years old, with Suga turning 30 in March.

Under South Korean law, most able-bodied men are required to perform 18-21 months of military service, but special exemptions had been granted for athletes and artists who excel in certain international competitions that have been tied to national prestige.

The band — its other members being J-Hope, RM, Jungkook, V and Jimin — launched in 2013 and has a legion of global supporters who call themselves the “Army.”

After building a huge following in Asia, BTS expanded its popularity in the West with its 2020 megahit “Dynamite,” the band’s first all-English song that made it the first K-pop act to top Billboard’s Hot 100. The band has performed in sold-out arenas around the world and was even invited to speak at United Nations meetings.

Since South Korea’s draft interrupts young males in their professional careers or studies, the dodging of military duties or creation of exemptions is a highly sensitive issue. Opinion surveys in recent weeks showed that the public was split over whether the BTS members should serve in the military.