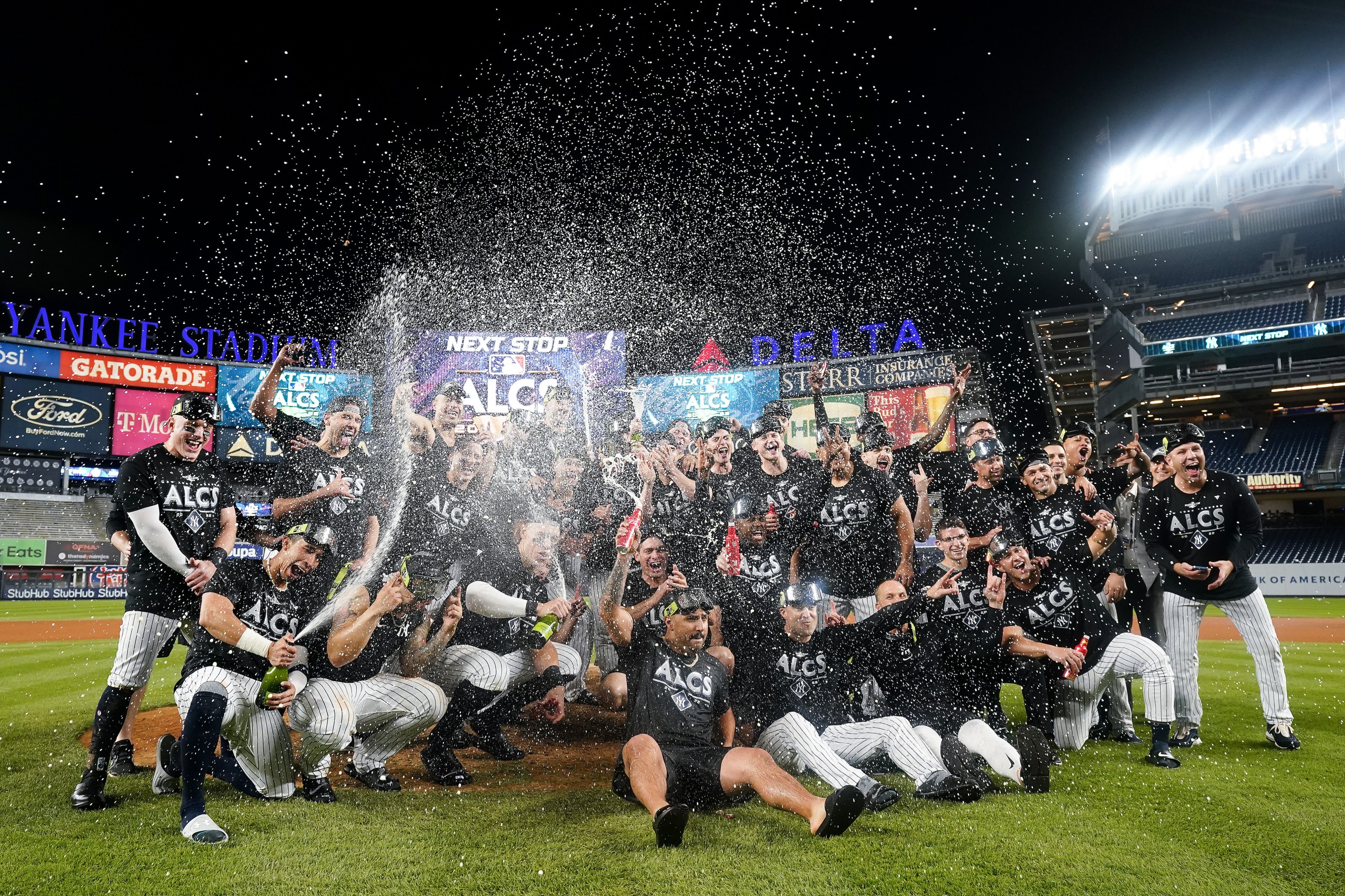 NEW YORK (AP) — Gleyber Torres stepped on second base for the final out, swinging his arms back and forth, four times in all, while glaring at Josh Naylor and the Guardians dugout.

Giancarlo Stanton and Aaron Judge rocked Cleveland with early homers, and Nestor Cortes and the New York Yankees rolled into another AL Championship Series matchup with the Houston Astros.

“We got our revenge. We’re happy to beat those guys. Now they can watch on TV the next series for us,” Torres said after the Yankees beat the Guardians 5-1 in the decisive Game 5 of their AL Division Series on Tuesday night. “It’s nothing personal. Just a little thing about revenge.”

Taillon will start Wednesday night at Houston, which goes with Justin Verlander. The AL matchup features the league’s top two regular-season teams in the 106-win Astros and 99-win Yankees, a contrast to the NL championship between wild-card San Diego and Philadelphia.

Cole got two wins against Cleveland and carved the Guardians with just three words. Naylor made the rocking the baby motion repeatedly while rounding the bases after homering off Cole in Game 4.

“We feel like it is a little disrespectful, not just Cole but for the team,” Torres said.

Yankees fans in the sellout crowd of 48,178 greeted Naylor with derisive chants of “Who’s your daddy!” echoing their treatment of Boston pitcher Pedro Martinez two decades ago.

“That was so sick,” he said. “That was honestly like a dream come true as a kid. Playing in an environment like this, where they’ve got diehard fans. It’s cool.”

Now 27, Cortes he was traded by the Yankees to Seattle after the 2019 season, was dropped by the Mariners a year later and became an All-Star after resurfacing in the Bronx.

“Just the legend of Nestor,” Boone said. “Honestly going in, I would have been really excited about 10 batters.”

Cortes dominated with three-hit ball for five innings for the win, throwing 61 pitches.

“I’ve got nothing to lose. I’ve been in the gutter before. I’ve been down,” Cortes said. “So for me, this is just a cherry on top,”

“Just getting the last out, it’s hard to explain. It’s such an exciting moment,” Peralta said through a translator.

With two outs and two on, Myles Straw hit a grounder to shortstop Isiah Kiner-Falefa, who flipped to Torres to end it.

Anthony Rizzo had a fifth-inning RBI bloop single for AL East champion New York, which is seeking its 28th title and first since 2009,

AL Central champion Cleveland, the youngest team in the majors, remained without a championship since 1948. The Guardians whose $68 million payroll is a fraction of the Yankees’ $274 million, led 2-1 in the best-of-five series.

“I know they are hurting right now,” Francona said. “This needs to be a starting place for us. This can’t just be a good story this year. We need to take this and go, because I think we have a chance to have something really special.”

José Ramírez’s third-inning sacrifice fly drove in the only run for Cleveland, which has lost a big league record 11 straight postseason elimination games.

New York hit .182 but outhomered the Guardians 9-3 as Stanton and Judge each went deep twice. The Yankees scored 16 of their 20 runs on long balls.

“We definitely had to throw the first punch in a game like this,” Stanton said.

Judge, who homered on an opposite-field drive to right against Sam Hentges, became the first player with four homers in winner-take-all postseason games. He tugged at and kissed the interlocking “NY” on his jersey after reaching the dugout.

“I’ve been watching a lot of Premier League soccer games. So I’ve seen those guys doing it,” Judge said. “It was in the moment.”

Civale threw just 12 of 26 pitches for strikes, getting only one swing and miss and just one out.

Torres walked on four pitches leading off, Judge struck out on a full-count curveball and Civale hit Rizzo on the left thigh with a pitch.

Stanton lined a cutter 379 feet into the short right-field porch, a drive that would be a home run in only three of the 30 major league ballparks.

Civale stared into his stall after the game, wearing a hooded sweatshirt, before showering and then answeing questions.

“Just didn’t have great command early on and didn’t last very long,” he said. “Left a pitch up, rand one of the guys that gets paid to hit home runs hit a home run.”

Cleveland failed to ask for a video review in the fourth inning when Andrés Giménez clearly beat a diving Rizzo to the first-base bag. Francona said he ran out of time.

Yankees: LF Aaron Hicks hurt his left knee in a collision with SS Oswaldo Cabrera chasing a Steven Kwan’s popup, which fell for a single. Hicks said his postseason is over after an MRI showed the knee requires a six-week recovery. … RHPs Ron Marinaccio (right shin) and Frankie Montas (right shoulder) could be activated agaist Houston. … OF Andrew Benintendi (right wrist) is unlikely.

Guardians: Open the season at Seattle on March 30.