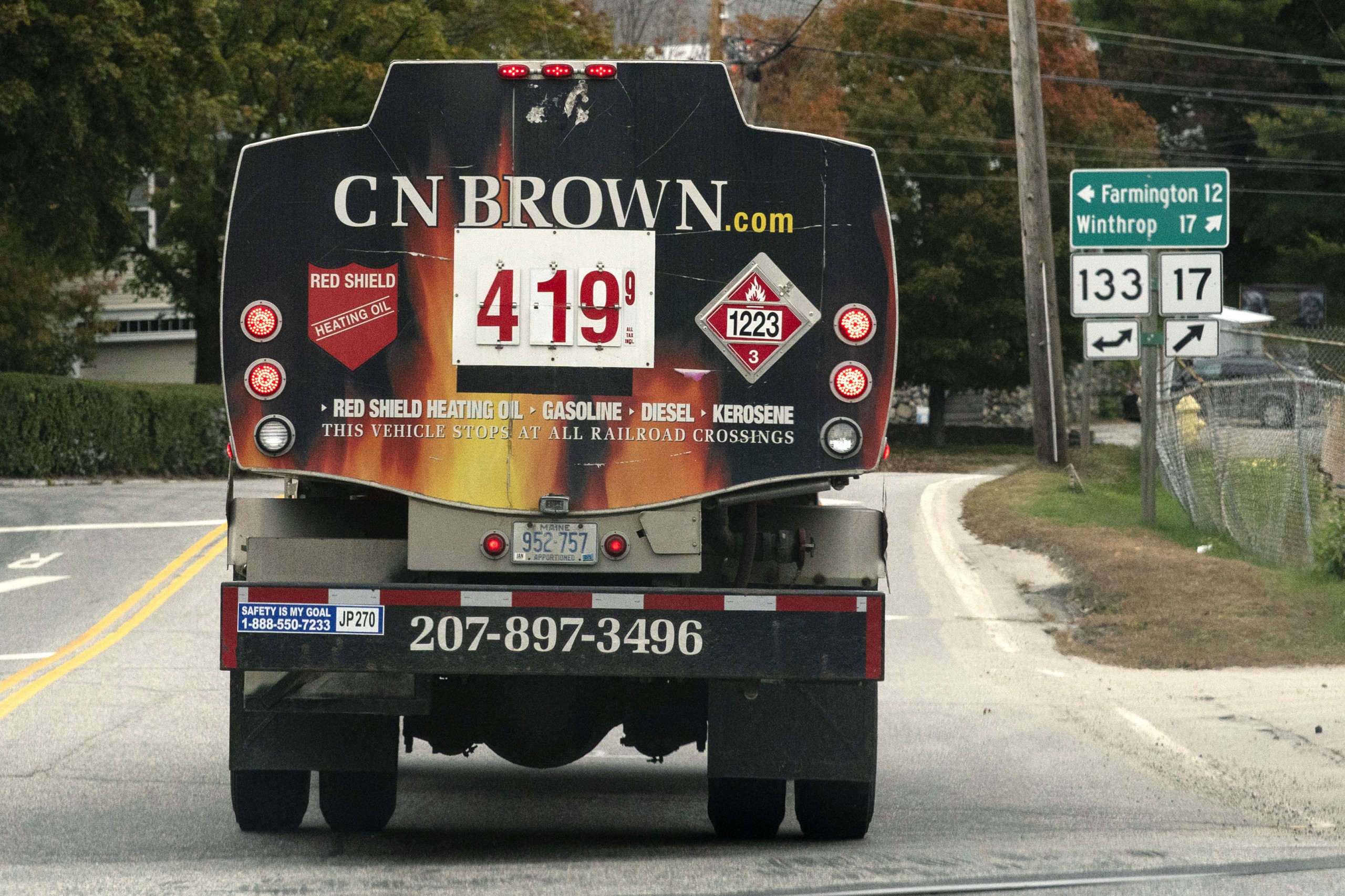 A fuel delivery truck advertises its price for a gallon of heating oil, Wednesday, Oct. 5, 2022 in Livermore Falls, Maine. Winter is still two months away, but people are already worried about staying warm amid high energy costs and disruptions around the world. (AP Photo/Robert F. Bukaty)

JAY, Maine (AP) — Across the U.S., families are looking to the winter with dread as energy costs soar and fuel supplies tighten.

The Department of Energy is projecting sharp price increases for home heating compared with last winter and some worry whether heating assistance programs will be able to make up the difference for struggling families. The situation is even bleaker in Europe, with Russia’s continued curtailment of natural gas pushing prices upward and causing painful shortages.

In Maine, Aaron Raymo saw the writing on the wall and began stocking up on heating oil in 5-gallon increments over the summer as costs crept upward. He filled a container with heating oil as he could afford it, usually on paydays, and used a heating assistance program to top off his 275-gallon oil tank with the arrival of colder weather.

His family is trying to avoid being forced into a difficult decision — choosing between food or heating their home.

A number of factors are converging to create a bleak situation: Global energy consumption has rebounded from the start of the pandemic, and supply was barely keeping pace before the war in Ukraine further reduced supplies.

The National Energy Assistance Directors Association says energy costs will be the highest in more than a decade this winter.

The Energy Department projects heating bills will jump 28% this winter for those who rely on natural gas, used by nearly half of U.S. households for heat. Heating oil is projected to be 27% higher and electricity 10% higher, the agency said.

That comes against inflation rates that accelerated last month with consumer prices growing 6.6%, the fastest such pace in four decades.

The pain will be especially acute in New England, which is heavily reliant on heating oil to keep homes warm. It’s projected to cost more than $2,300 to heat a typical home with heating oil this winter, the energy department said.

Across the country, some are urging utilities to implement a moratorium on winter shut-offs, and members of Congress already added $1 billion in heating aid. But there will be fewer federal dollars than last year when pandemic aid flowed.

In Jay, where Raymo lives with his partner, Lucinda Tyler, and 8-year-old son, residents were already bracing for the worst before the local paper mill announced it’s going to close, putting more than 200 people out of work. That has the potential to wreak havoc on the town budget, and cause higher property taxes that will further eat into residents’ budgets.

Both Raymo and Tyler work full-time jobs. He works as many as 70 or 80 hours a week in an orthopedists’ office and she works from home in shareholder services for a financial services company. They don’t qualify for much help even though they’re scraping by to keep up with repairs, buy gas and put food on the table — and heat their 100-year-old home in a state known for bitter cold weather.

“We work significant hours but it seems that it’s not enough,” said Tyler, who wept with relief when she learned they qualified for even a modest amount of heating assistance.

The third hottest summer on record already strained LIHEAP funding, “so I am glad that we were able to secure these new resources before the cold of winter sets in,” said Senate Appropriations Committee Chairman Patrick Leahy, a Democrat from Vermont.

But that level represents an overall reduction from last year, when federal pandemic relief pushed the total energy assistance package past $8 billion.

Some are seeking help who’ve never done so in the past. In Auburn, Maine, 72-year-old Mario Zullo said he worked all his life and never asked for help until last year when he received heating assistance last year. The program helped upgrade his heating.

“It came to us at a time when we needed it the most,” Zullo said.

Mark Wolfe, executive director of NEADA, said he fears the federally funded program won’t be enough because of the high cost of energy and continued instability in energy markets. It could be even worse if the winter is especially cold, he said.

“The crisis is coming,” he said. “There’s a lot of uncertainty and factors in play that could drive these prices higher.”

In Maine, the state has the nation’s oldest population and it’s the most reliant on heating oil, creating a double whammy.