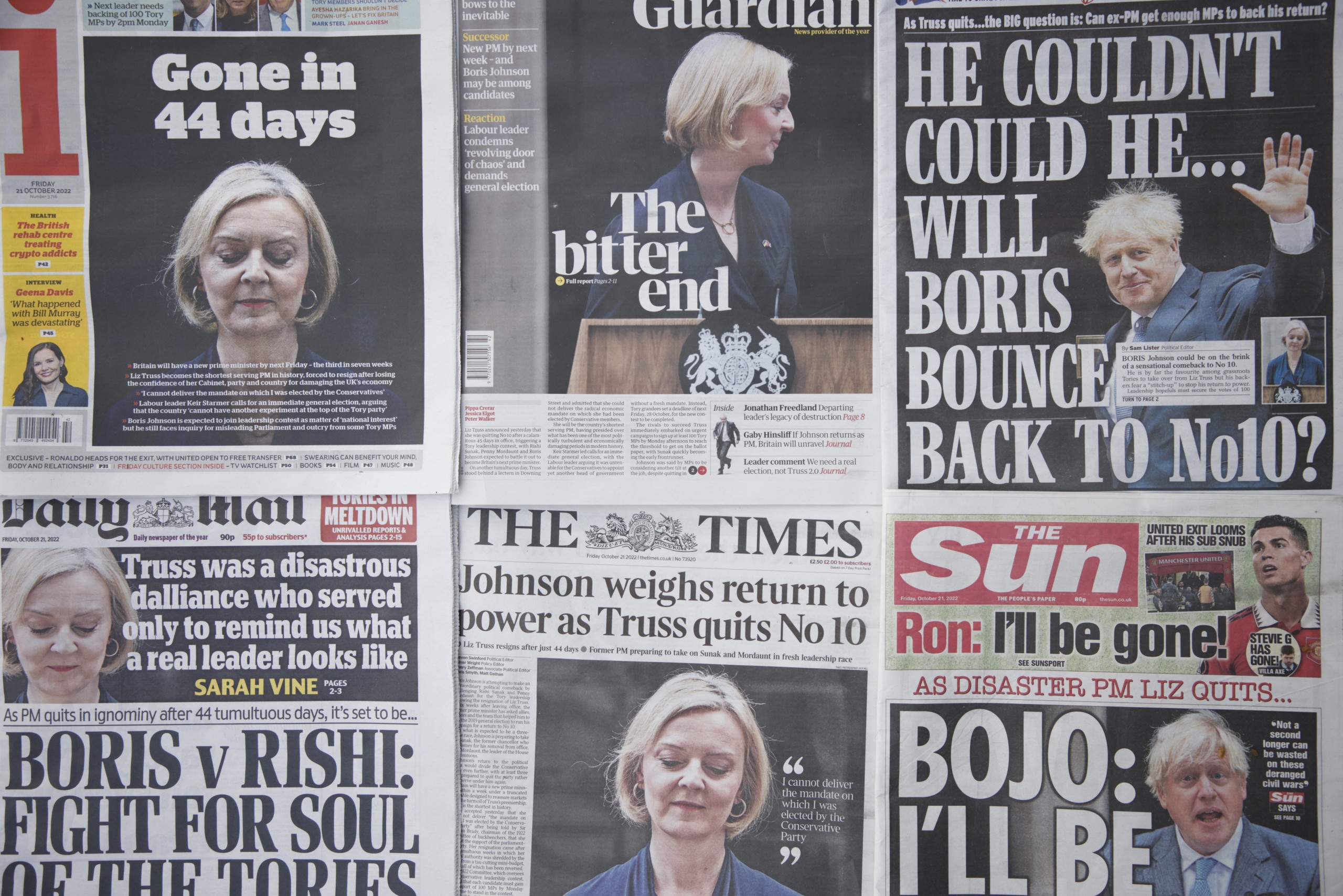 A selection of the front pages of British national newspapers showing the reaction the the resignation of Prime Minister Liz Truss, in central London, Friday, Oct. 21, 2022. British Prime Minister Liz Truss resigned Thursday, bowing to the inevitable after a tumultuous, short-lived term in which her policies triggered turmoil in financial markets and a rebellion in her party that obliterated her authority. (AP Photo/David Cliff)

The governing Conservative Party has ordered a lightning-fast race that aims to have a new prime minister in place within a week at a time when Britain can ill afford uncertainty at the top. Millions are struggling to make ends meet as the cost of groceries, fuel and other basics soars and record inflation pushes up mortgage rates. Rolling strikes have revealed the scale of discontent. And a recession is looming.

Though no politician has officially declared, bookmakers have made Johnson one of the favorites to win the contest — reflecting the scale of division and disarray in the party as it picks its third prime minister of the year. It would be an astonishing comeback for a polarizing figure forced out just over three months ago amid a welter of ethics scandals.

Truss quit on Thursday after a turbulent 45-day term, conceding that she could not deliver on her tax-cutting economic package, which she had to abandon after it cause turmoil in financial markets.

In the race to replace her, former Treasury chief Rishi Sunak and House of Commons leader Penny Mordaunt are among the favorites — along with Johnson, who still faces an inquiry into whether he lied to Parliament while in office that could lead to his suspension as a lawmaker.

Despite his troubles, Johnson is still adored by some Conservatives as a vote winner with a rare common touch who led the party to a big election victory in 2019. He is more popular with the party’s grassroots than with lawmakers — and he is reviled by some for the chaos and scandal that marred his term in office.

“Having a winner in place is what the party needs to survive,” Johnson ally Nadine Dorries told Sky News.

But former Conservative leader Michael Howard implored the party not to return to the “psychodrama” of the Johnson era.

“He’s had his chance, and it didn’t work,” Howard said. Some Conservative legislators have even threatened to leave the party if Johnson returns as leader.

Rob Ford, professor of political science at the University of Manchester, said Conservatives who thought Johnson could solve their problems “don’t live in a reality-based community.”

He warned that the electorate at large has not forgotten Johnson’s many scandals — and he no longer has the appeal he once did.

“We know the public don’t like him, he can’t govern, he definitely can’t unify his party. It will be a disaster. It will fail,” Ford said.

Johnson, who remained a lawmaker after stepping down as prime minister, has not said whether he will run, but his allies in Parliament are working to gather support for an “I’m Backing Boris” campaign. Johnson is expected to return shortly from a Caribbean vacation.

Nominations for a new leader will close on Monday afternoon, and candidates need the signatures of 100 of the 357 Conservative lawmakers, meaning a maximum field of three. Lawmakers will vote to knock out one of those, and will hold an indicative vote on the final two. The party’s 172,000 members will then get to decide between the two finalists in an online vote. The new leader is due to be selected by Oct. 28.

Sunak, who came second to Truss in a summertime leadership contest, is favored by some as a safe pair of hands to steady the struggling economy. Mordaunt, who came third, is popular with the party’s grassroots.

Popular Defense Secretary Ben Wallace, who was touted as a possible contender, ruled himself out of the race on Friday.

But the wild card is Johnson.

He was able to shrug off lapses that would have sunk many politicians, surviving even after he was fined by police for attending one of a series of illegal parties in government buildings while the U.K. was under lockdowns during the coronavirus pandemic.

He finally resigned after one scandal too far — this one involving his appointment of a politician who had been accused of sexual misconduct — sparked an exodus of dozens of members of his government.

He left reluctantly, calling the decision to oust him “eccentric” and ending his final appearance in Parliament with the words: “Hasta la vista, baby.”

Truss was chosen by the party early last month to replace him, but quit after her brief, disastrous experiment in libertarian economics pummeled the value of the pound and caused further pain for people and businesses already struggling in an economy still reeling from Britain’s exit from the European Union, the coronavirus pandemic and the war in Ukraine.

Her package of unfunded tax cuts roiled financial markets, drove up the cost of government borrowing and home mortgages, and forced emergency Bank of England intervention. Truss executed a series of U-turns and replaced her Treasury chief but faced rebellion from lawmakers in her party that obliterated her authority.

Truss admitted Thursday that “I cannot deliver the mandate on which I was elected by the Conservative Party.”

Whoever replaces her will have to make tough economic decisions, with government debt rising, the economy stuttering and inflation at a 40-year-high.

The Conservative turmoil at a time of such high stakes is fueling demands for a national election. Under Britain’s parliamentary system, there does not need to be one until the end of 2024, though the government has the power to call one sooner.

Currently that looks unlikely. Opinion polls say an election would spell disaster for the Conservatives, with the left-of-center Labour Party winning a large majority.

Still, opposition politicians say the recent tumult — and the decision by Truss to rip up many of the policies on which Johnson was elected — means the government lacks democratic legitimacy.

Labour leader Keir Starmer accused the Conservatives of presiding over a “revolving door of chaos.”

“This is doing huge damage to our economy and the reputation of our country,” he said. “We must have a chance at a fresh start. We need a general election — now.”