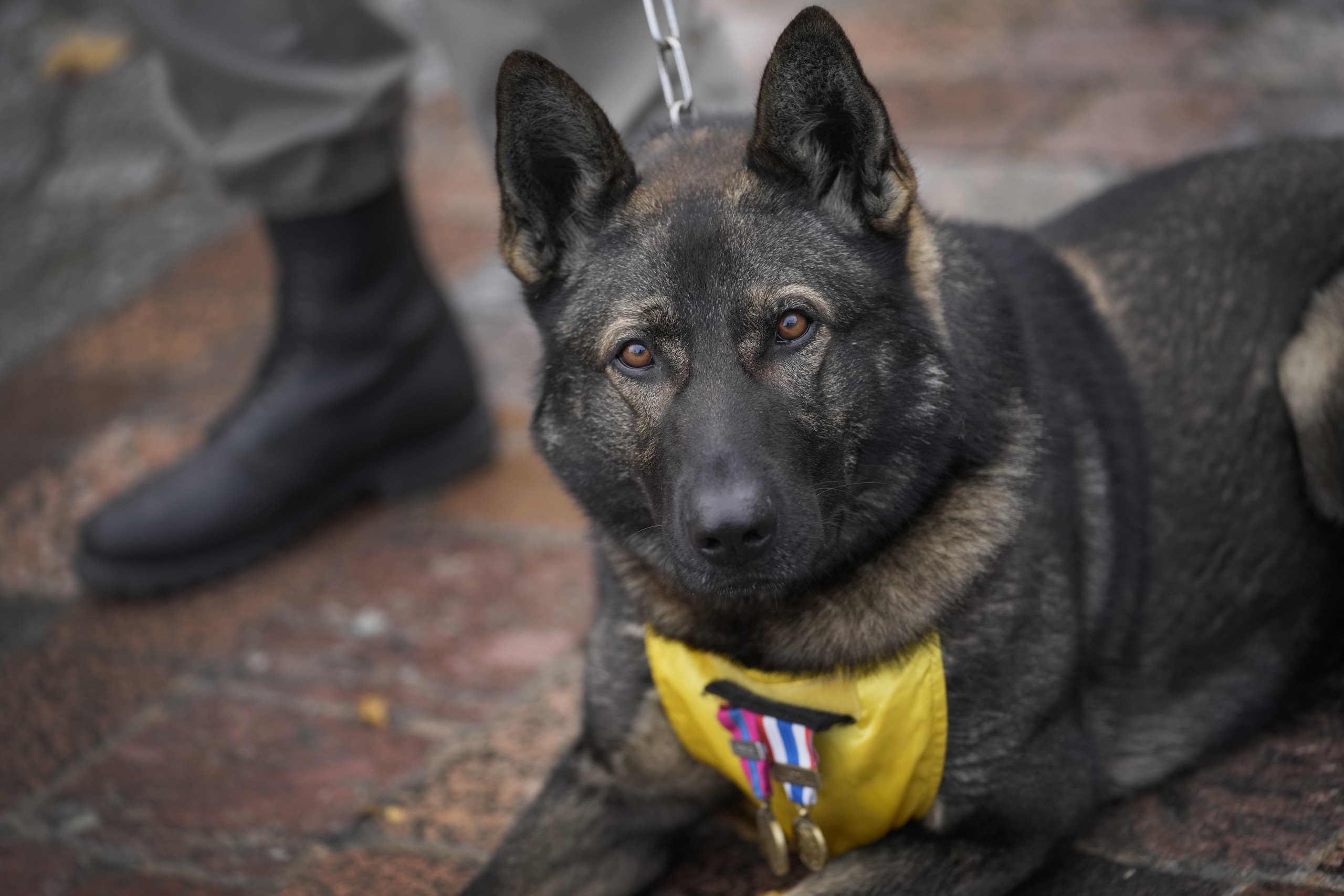 A French soldier with his dog Sparcel stands at attention during a ceremony in Suippes, eastern France, Thursday, Oct. 20, 2022. France inaugurated on Thursday its first memorial paying tribute to all “civilian and military hero dogs” in Suippes, in eastern France. The monument is located on a key World War I site, echoing the important role played by dogs in U.S. and European armies at the time. (AP Photo/Christophe Ena)

SUIPPES, France (AP) — From tracking down suspects in the 2015 Paris terror attacks to fighting extremists in Africa’s Sahel region, dogs have helped French soldiers, police officers and rescue teams save lives for more than a century.

In recognition of the four-pawed partners, France this week inaugurated a memorial paying tribute to all “civilian and military hero dogs.” It features a sculpture by French-Columbian artist Milthon depicting a World War I soldier and his dog huddled together.

The monument is located in front of the town hall in Suippes, part of an area of northeast France that saw major battles during World War I. The placement acknowledges the important role dogs played in the U.S. and European armies of the time.

Suippes is also home to the largest military kennel in Europe, where members of the French army’s 132nd canine infantry regiment train dogs for military duty. The regiment currently consists of 650 army personnel and 550 dogs.

The monument in homage to hero dogs was an initiative of the French kennel club, the Centrale Canine. Animals from the army regiment attended Thursday’s ceremony inaugurating the memorial wearing their military medals.

“It’s very important (recognition) because dogs, like human beings, carry out missions, but we don’t ask them for their opinion. So to me, it’s fair to give them back a medal,” Johann, an adjutant in a combat unit, said.

He and other human members of the unit could only be identified by their first names for security reasons related to their military status.

The regiment in Suippes is preparing dogs for combat zones where they would be tasked with sniffing out and chasing a potential enemy. Some are also trained to detect explosives and drugs. Each dog is paired with a soldier.

Johann, a member of the regiment for 12 years, is now paired with a Dutch shepherd named Nasky. He has not lost a dog in action, though has colleagues who have.

“It’s significant from a psychological point of view and very hard for the handler. But in those moments, we take upon ourselves (to continue) and when we don’t have our dog anymore, we still are infantry soldiers and we must be able to continue our missions,” he said.

The regiment’s recruits are involved in French operations abroad, including in Africa’s Sahel region, West Africa and the Middle East. They also are sent on domestic missions and to work in French territories overseas, such as combating gold trafficking in French Guiana.

The dogs selected for training sometimes are recruited when they are puppies, but most are 18-months-old. Many come from France, others from the Netherlands, Germany and countries in eastern Europe.

They go through a series of tests to see whether they are enthusiastic about biting, willing to play and not easily startled in a stressful environment. The most important quality required is bravery, the regiment’s soldiers said.

“We use a lot their olfactory sense, their sight, their physical abilities. That’s why we have lots of Belgian, German shepherds, dogs who can run, who are resistant to heat and cold,” canine unit member Audrey explained. “They are very good working dogs.”

When they no longer can fulfill their missions, the dogs are retired. Audrey plans to keep her partner, Moocki, with her at home when the time comes. She explained “the handlers are the ones in best position to choose families” for retired dogs.

“We’re trying, as handlers, to do this the best we can… depending on the dog, the character. Some dogs may also have post-traumatic stress disorder,” she said.

France created its first department to train dogs for active duty during World War I. They searched for wounded soldiers, warned sentinels and carried messages, food and ammunition on the front lines of the 1914-1918 war.

Thursday’s ceremony in France notably paid tribute to Diesel, a police dog killed in a raid targeting the mastermind of the Paris attacks in 2015, and to Leuk, an assault dog of the French military killed by an extremist in Mali in 2019.

Other nations have recognized the wartime contributions of dogs. Ukrainian President Volodymyr Zelenskyy awarded a medal to a Jack Russell terrier named Patron that sniffed for mines after Russia invaded Ukraine. Patron later received a visit from U.S. Secretary of State Antony Blinken who praised him as “world famous.”

In the United States, the first national monument dedicated to military working dog teams was unveiled in 2013 at Joint Base San Antonio-Lackland in Texas, home to the world’s largest training center for military dogs.