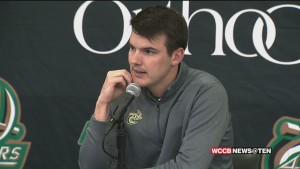 CHARLOTTE, N.C. (AP) — Charlotte fired coach Will Healy on Sunday after the 49ers fell to 1-7 in their final season as a member of Conference USA.

“We are grateful to Will Healy for the incredible energy and enthusiasm he brought to our program,” said Charlotte 49ers athletic director Mike Hill. “He made an impact here that will never be forgotten. Sadly, however, our on-field results have not met expectations. Will and his family are special people and we wish them the best.”

Healy, one of the youngest head coaches in major college football at 37, fell to 15-24 in four seasons at Charlotte after losing 34-15 to Florida International on Saturday. That dropped the 49ers into last place in C-USA.

Offensive line coach Pete Rossomando was elevated to interim head coach. Rossomando is in his second season with the 49ers. He has previous head coaching experience at New Haven and Central Connecticut State and was named the NCAA Div. II National Coach of the Year following the 2012 season at New Haven. He was a finalist for the Eddie Robinson FCS Coach of the Year Award in 2017 while at Central Connecticut State.

Charlotte is set to make a jump up in competition next season when it joins the American Athletic Conference along with five other C-USA schools.