DALLAS (AP) – The NTSB is investigating the cause of a midair crash of two historic military planes during an air show in Dallas that left six people dead.

A World War II-era bomber and a fighter plane collided and crashed to the ground in a ball of flames on Saturday, leaving crumpled wreckage in a grassy area inside the Dallas Executive Airport perimeter, about 10 miles (16 kilometers) from the city’s downtown. Several videos posted on social media showed the fighter plane flying into the bomber.

The crash claimed six lives, Dallas County Judge Clay Jenkins tweeted Sunday, citing the county medical examiner. Authorities are continuing work to identify the victims, he said. Dallas Fire-Rescue said there were no reports of injuries on the ground. 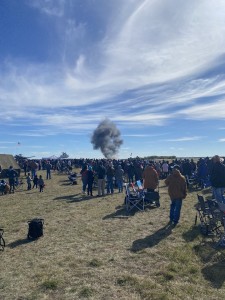 DALLAS (AP) — Two historic military planes collided and crashed to the ground Saturday during a Dallas air show, federal officials said, sending plumes of black smoke billowing into the sky. It was unclear how many people were on board the aircraft or if anyone on the ground was hurt.

Emergency crews raced to the crash scene at the Dallas Executive Airport.

There has been an incident at Dallas Executive Airport during the CAF Airshow and Dallas Fire and Rescue is responding. More information will follow.

A Boeing B-17 Flying Fortress and a Bell P-63 Kingcobra collided and crashed around 1:20 p.m., the Federal Aviation Administration said in a statement. The collision occurred during the Commemorative Air Force Wings Over Dallas show.

Several videos posted on Twitter showed two aircraft appearing to collide in the air before they both rapidly descended, causing a large fire and clouds of black smoke to billow into the sky.

The FAA and the National Transportation Safety Board were launching investigations.