RICHMOND, Va. (AP) — The city of Richmond — the capital of the Confederacy for most of the Civil War — removed its last city-owned Confederate statue on Monday, more than two years after it began to purge itself of what many saw as painful symbols of racial oppression.

It took just minutes to free the statue of Confederate Gen. A.P. Hill from its base, before a crane using yellow straps looped under the statue’s arms lifted it onto a bed of tires on a flatbed truck. After the statue was removed, the crew got to work removing the base. Several dozen people, including neighbors, some of Hill’s indirect descendants and supporters and opponents of the removal, stood in the closed intersection watching the crew work. 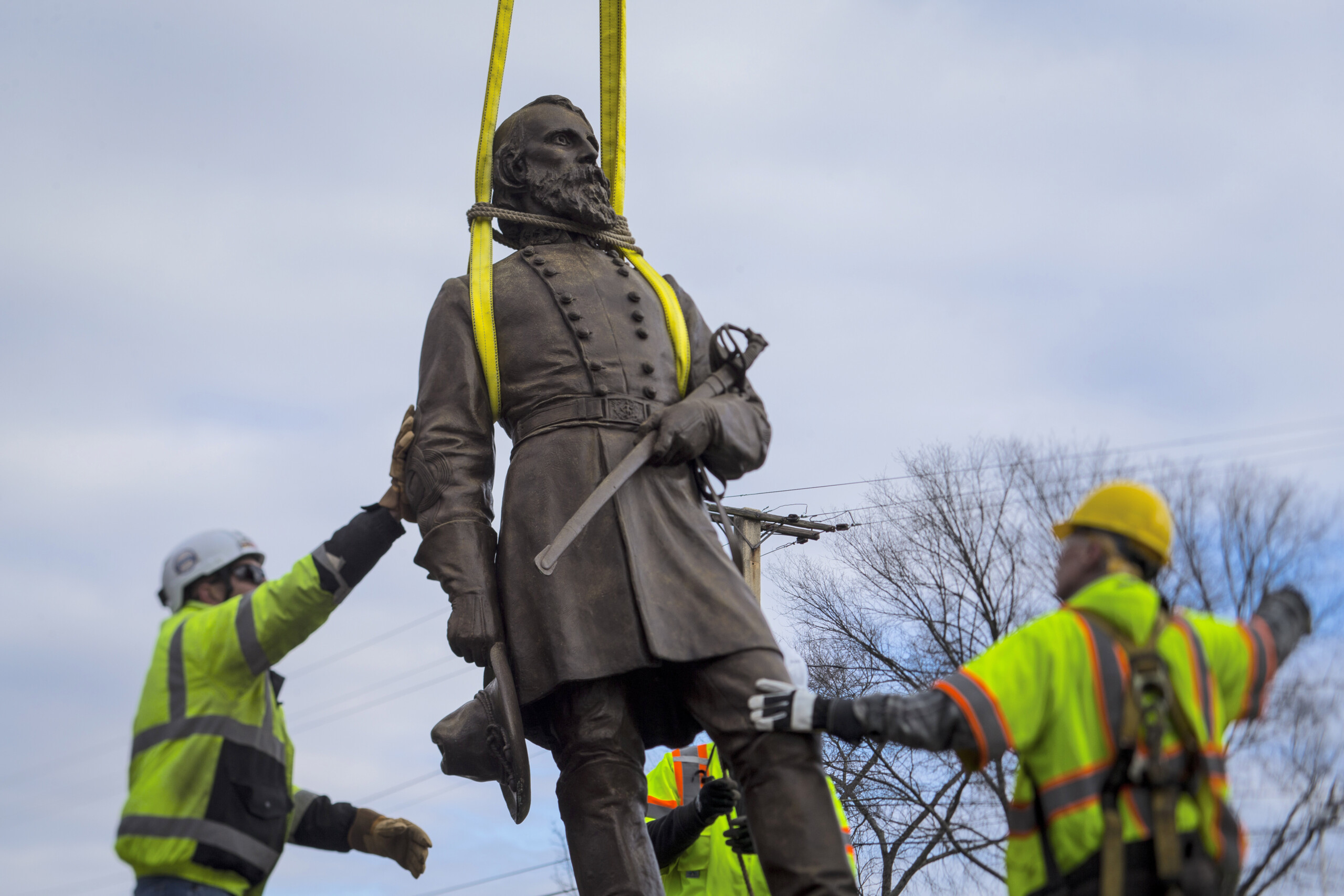 Workers begin to lay the bronze statue of Confederate General A.P. Hill onto a flatbed truck on Monday Dec. 12, 2022 in Richmond, Va. Workers are still planning to exhume the remains of General Hill which located inside the base of the statue. (AP Photo/John C. Clark)

Richmond removed its other Confederate monuments amid the racial justice protests that followed George Floyd’s killing in 2020. But efforts to remove the Hill statue, which sat in the middle of a busy intersection near a school, were more complicated because the general’s remains were interred beneath it about 25 years after his death at the end of the Civil War.

Many Confederate statues in Virginia were erected decades after the Civil War, during the Jim Crow era, when states imposed new segregation laws, and during the “Lost Cause” movement, when historians and others tried to depict the South’s rebellion as a fight to defend states’ rights, not slavery. Some Confederate tributes remain in Richmond, but they’re on state land, including on Capitol Square surrounding the Virginia State Capitol building.

Ambrose Powell Hill died days before the war’s end in 1865, according to a timeline provided in court documents during a legal battle over the removal. His remains were interred in a family cemetery in Chesterfield County, according to a city petition to move the remains. The remains were moved in 1867 to Hollywood Cemetery in Richmond, where they remained until 1891, when they were moved to the spot where the monument was unveiled the following year.

Attorneys for Hill’s indirect descendants agreed his remains would be moved to a cemetery in Culpeper, near where Hill was born. But the plaintiffs wanted ownership to be transferred to them in hopes of moving the statue to a battlefield or some other location, said John Hill, one of Hill’s descendants who drove eight hours from his home in Ohio to watch the statue be removed.

Hill, 33, said he is a cousin of Hill’s and his closest living indirect descendant. He said the family considers the statue Hill’s headstone and wanted the statue and Hill’s remains to stay together.

“It’s his headstone. I just feel like anybody else’s headstone with their family name on it, you don’t want to see that come down,” he said.

Hill said he was opposed to the removal of all the Richmond-owned Confederate statues because he sees them as a part of history. He also said that although many of the statues are seen as symbols of slavery and oppression, his ancestor did not own slaves.

“All of his census documents show he never owned a slave and he did not believe in slavery.”

In October, a judge ruled that city officials — not the descendants — would get to decide where the statue went next.

City officials said the removed statue will be stored in an undisclosed location and later given to the Black History Museum and Cultural Center of Virginia. John Hill indicated that Hill’s descendants will continue to fight that plan in court.

The removal of the Hill statue makes about a dozen city-owned Confederate statues that have been removed.

“Richmond had more Confederate monuments than any other city in the United States of America, and we were the former capital of the Confederacy,” said Mayor Levar Stoney. “And so this wasn’t just two years of work, this was a hundred years of difficult work.”

“I’m proud of my city,” Stoney said. “We’ve done something that a lot of communities have struggled with, and I think a ton of people are ready to turn the page.”