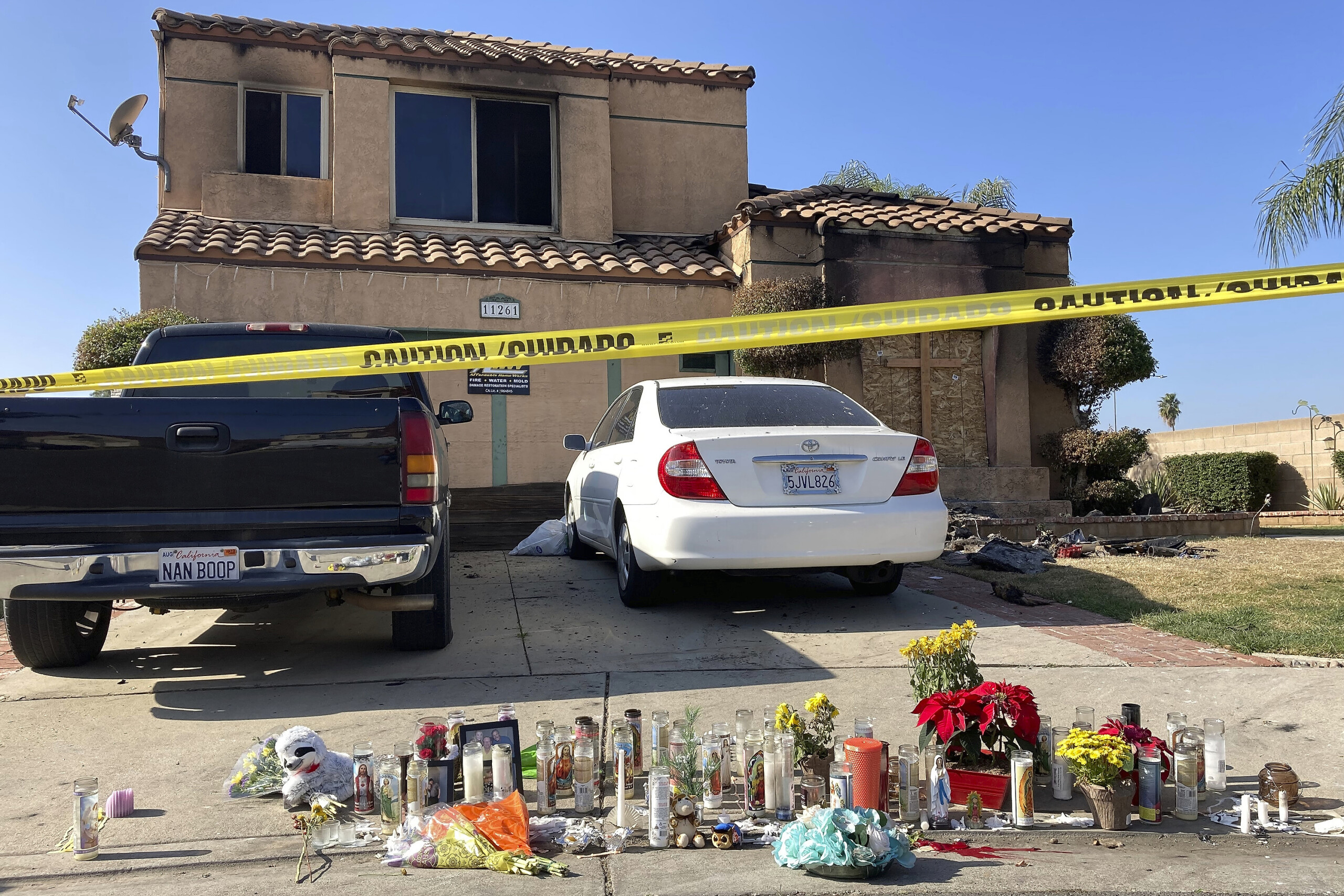 FILE – Dozens of candles sit placed on the sidewalk along with bouquets of flowers and stuffed animals outside a charred home in Riverside, Calif., on Nov. 30, 2022. The Virginia Office of the State Inspector General is investigating the state police hiring of a man who drove across the country, kidnapped a 15-year-old California girl and killed her mother and grandparents. (AP Photo/Amy Taxin, File)

RICHMOND, Va. (AP) — After a former state trooper from Virginia drove across the country, kidnapped a 15-year-old California girl, killed three members of her family, then shot himself, Virginia State Police and the sheriff’s office he had recently started working for said they found no warning signs during background checks before he was hired.

But in the weeks since Austin Lee Edwards went on a rampage in Riverside, California, it’s become clear Virginia State police missed red flags about Edwards’ mental health that were in plain sight before they hired him in 2021.

Virginia Gov. Glenn Youngkin has called for a “full investigation” by the state inspector general’s office.

“I believe that there was human error here,” Youngkin said last week in response to a reporter’s question about whether state police should have done more to investigate Edwards’ background before hiring him.

“Our job is to not let this happen again,” Youngkin said.

Edwards was hired by state police and entered the police academy in July 2021. He graduated as a trooper in January and worked for only nine months before resigning in October. Edwards was hired as a deputy sheriff in Washington County, Virginia, on Nov. 16, just nine days before the killings in California.

Authorities in California have said Edwards posed online as a 17-year-old boy while communicating with the girl, a form of deception known as “catfishing.” He asked her to send nude photos of herself and she stopped communicating with him.

On Nov. 25, Edwards killed the girl’s mother and grandparents, then set fire to their home in Riverside, a city about 50 miles (80 kilometers) southeast of downtown Los Angeles.

Edwards died by suicide during a shootout with San Bernardino sheriff’s deputies the same day. The girl was rescued. Family members and police said the girl is now in counseling for trauma.

That admission came in response to news reports that Edwards had been involuntarily held at a psychiatric facility after he threatened to kill his father and himself in 2016, when he was 21.

A report written by police in Abingdon, Virginia, near the Tennessee border, said Edwards’ father restrained him after he found his son with a self-inflicted injury to his hand. The incident was first reported by the Los Angeles Times.

“Austin made several statements in the presence of Officers that he wanted to die, that he would try to kill himself the instant he was free from restraints, and that he would kill his father,” police wrote in the report, which was obtained by The Associated Press.

An emergency custody order was issued, followed by a temporary detention order, which allowed police to take him to a psychiatric facility.

The scope of Virginia Inspector General Michael Westfall’s investigation was not immediately clear. His office released a statement Friday saying it had received a request to “review a recent Virginia State Police matter,” but a spokesperson did not respond to a phone message and email seeking details on the parameters of the investigation.

Youngkin’s office also declined to discuss specifics. Spokesperson Macaulay Porter said in a statement that Youngkin “has full confidence that they will follow the evidence, wherever it may lead.”

The inspector general’s office focuses on investigating complaints about fraud, waste and abuse in the executive branch of state government. It also conducts investigations and performance audits of state agencies.

“The IG has fairly wide-ranging investigatory powers that are defined by statute, but the statute is fuzzy enough so that the IG might be able to investigate general issues that the governor asks the IG to investigate,” said Henry Chambers, a law professor at the University of Richmond.

Geller said state police believe the error made during the hiring process for Edwards was “an isolated incident,” and said “steps are currently underway to ensure the error is not repeated going forward.”