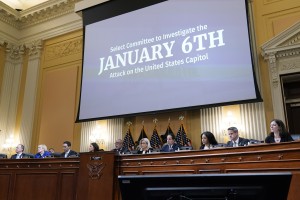 WASHINGTON (AP) — An 800-page report set to be released Thursday by House investigators will conclude that then-President Donald Trump criminally plotted to overturn his 2020 election defeat and “provoked his supporters to violence” at the Capitol with false claims of widespread voter fraud.

The resulting Jan. 6, 2021, insurrection of Trump’s followers threatened democracy with “horrific” brutality toward law enforcement and “put the lives of American lawmakers at risk,” according to the report’s executive summary.

“The central cause of January 6th was one man, former President Donald Trump, who many others followed,” reads the report from the House Jan. 6 committee, which is expected to be released in full on Thursday. “None of the events of January 6th would have happened without him.”

Ahead of the report’s release, the committee on Wednesday evening released 34 transcripts from the 1,000 interviews it conducted over the last 18 months. Most of those released are of witnesses who invoked their Fifth Amendment right against self-incrimination.
The report’s eight chapters of findings will largely mirror nine hearings this year that presented evidence from the private interviews and millions of pages of documents. They tell the story of Trump’s extraordinary and unprecedented campaign to overturn his defeat and his pressure campaign on state officials, the Justice Department, members of Congress and his own vice president to change the vote.

A 154-page summary of the report released Monday detailed how Trump, a Republican, amplified the false claims on social media and in public appearances, encouraging his supporters to travel to Washington and protest Democrat Joe Biden’s presidential election win. And how he told them to “fight like hell” at a huge rally in front of the White House that morning and then did little to stop the violence as they beat police, broke into the Capitol and sent lawmakers running for their lives.

It was a “multi-part conspiracy,” the committee concludes.

The massive, damning report comes as Trump is running again for the presidency and also facing multiple federal investigations, including probes of his role in the insurrection and the presence of classified documents at his Florida estate. A House committee is expected to release his tax returns in the coming days — documents he has fought for years to keep private. And he has been blamed by Republicans for a worse-than-expected showing in the midterm elections, leaving him in his most politically vulnerable state since he won the 2016 election.

It is also a culmination of four years of a House Democratic majority that has spent much of its time and energy investigating Trump and that is ceding power to Republicans in two weeks. Democrats impeached Trump twice — both times he was acquitted by the Senate — and investigated his finances, his businesses, his foreign ties and his family.
But the Jan. 6 probe has been the most personal for the lawmakers, most of whom were in the Capitol when Trump’s supporters stormed the building and interrupted the certification of Biden’s victory.

While the lasting impact of the probes remains to be seen — most Republicans have stayed loyal to the former president — the committee’s hearings were watched by tens of millions of people over the summer. And 44% of voters in November’s midterm elections said the future of democracy was their primary consideration at the polls, according to AP VoteCast, a national survey of the electorate.

“This committee is nearing the end of its work, but as a country we remain in strange and uncharted waters,” said the panel’s chairman, Democratic Rep. Bennie Thompson of Mississippi, at the meeting Monday to adopt the report and recommend criminal charges against Trump. “We’ve never had a president of the United States stir up a violent attempt to block the transfer of power. I believe nearly two years later, this is still a time of reflection and reckoning.”

The “reckoning” committee members are hoping for is criminal charges against Trump and key allies. But only the Justice Department has the power to prosecute, so the panel sent referrals recommending the department investigate the former president on four crimes, including aiding an insurrection.

While its main points are familiar, the Jan. 6 report will provide new detail from the hundreds of interviews and thousands of documents the committee has collected. Transcripts and some video are expected to be released as well over the coming two weeks. Republicans take over the House on Jan. 3, when the panel will be dissolved.

“I guarantee there’ll be some very interesting new information in the report and even more so in the transcripts,” Rep. Adam Schiff, D-Calif., told “CBS Mornings.”

The transcripts released Wednesday include Jeffrey Clark, a senior official in the Trump Justice Department who worked to advance Trump’s efforts to overturn the election, and John Eastman, a conservative lawyer and an architect of Trump’s last-ditch efforts to stay in office. Each invoked his Fifth Amendment right against self-incrimination.

Also included in the release is testimony from witnesses associated with extremist groups that were involved in planning ahead of the attack. Oath Keepers founder Stewart Rhodes, who was convicted last month of seditious conspiracy for his role in the planning, and former Proud Boys leader Enrique Tarrio both spoke to the committee. Tarrio and four other members of the extremist group are in court on similar charges this month.

The summary of the report describes how Trump refused to accept the lawful result of the 2020 election and plotted to overturn his defeat. Trump pressured state legislators to hold votes invalidating Biden’s electors, sought to “corrupt the U.S. Department of Justice” by urging department officials to make false statements about the election and repeatedly, personally tried to persuade Vice President Mike Pence to upend democracy with unprecedented objections at the congressional joint session, it says.

Trump has tried to discredit the report, slamming members of the committee as “thugs and scoundrels” as he has continued to falsely dispute his 2020 loss.

In response to the panel’s criminal referrals, Trump said that “These folks don’t get it that when they come after me, people who love freedom rally around me. It strengthens me.”

The report will give minute-by-minute detail of what Trump was doing — and not doing — for around three hours as his supporters beat police and broke into the Capitol. Trump riled up the crowd at the rally that morning and then did little to stop his supporters for several hours as he watched the violence unfold on television inside the White House and ignored pleas from aides to stop it.

Lawmakers point out the evidence about Trump’s actions they still do not have from that time, including call logs, entries in the official daily diary or calls to any security officials.

“President Trump did not contact a single top national security official during the day. Not at the Pentagon, nor at the Department of Homeland Security, the Department of Justice, the F.B.I., the Capitol Police Department, or the D.C. Mayor’s office,” the report says.

There is also a lack of official photographs of the president in those hours.

The panel also raised questions about whether some aides were pressured by Trump or his remaining allies not to be forthcoming during their interviews with the committee.