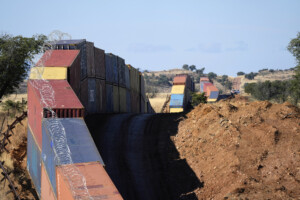 FILE – A long row of double-stacked shipping containers provide a new wall between the United States and Mexico in the remote section area of San Rafael Valley, Ariz., Thursday, Dec. 8, 2022. Arizona Gov. Doug Ducey will take down a makeshift wall made of shipping containers at the Mexico border, settling a lawsuit and political tussle with the U.S. government over trespassing on federal lands. (AP Photo/Ross D. Franklin, File)

PHOENIX (AP) — Arizona will take down a makeshift wall made of shipping containers at the Mexico border, settling a lawsuit and political tussle with the U.S. government over trespassing on federal lands.

The Biden administration and the Republican governor entered into an agreement that Arizona will cease installing the containers in the Coronado National Forest — the only national forest along the border — according to court documents filed Wednesday in U.S. District Court in Phoenix.

The agreement also calls for Arizona to remove the containers that were already installed in the remote San Rafael Valley, in southeastern Cochise County, and in the Yuma area where the U.S. Bureau of Reclamation has an easement on the Cocopah Indian Tribe’s reservation. All this must be done by Jan. 4 without damaging any natural resources. State agencies will have to consult with U.S. Forest Service representatives.

Gov. Doug Ducey has long maintained that the shipping containers were a temporary fixture. Even before the lawsuit, he wanted the federal government to say when it would fill any remaining gaps in the permanent border wall, as it announced it would a year ago.
“For more than a year, the federal government has been touting their effort to resume construction of a permanent border barrier. Finally, after the situation on our border has turned into a full blown crisis, they’ve decided to act,” said C.J. Karamargin, Ducey’s spokesperson. “Better late than never.”

“Final details are still being worked out on how much it will cost and when it will start,” he told The Associated Press.
Representatives for U.S. Customs and Border Protection did not immediately return messages seeking comment Thursday.
The resolution comes two weeks before Democrat Katie Hobbs, who opposes the construction, takes over as governor.
The federal government filed a lawsuit last week against Ducey’s administration on behalf of the Bureau of Reclamation, the Department of Agriculture and the Forest Service.

The federal government “owes it to Arizonans and all Americans to release a timeline,” Ducey wrote last week, responding to news of the pending federal lawsuit.
The work placing up to 3,000 containers at a cost of $95 million was about a third complete, but protesters concerned about its impact on the environment held up work in recent days.

Meanwhile, limits on asylum seekers hoping to enter the U.S. had been set to expire Wednesday before conservative-leaning states sought the U.S. Supreme Court’s help to keep them in place. The Biden administration has asked the court to lift the Trump-era restrictions, but not before Christmas. It’s not clear when the court might rule on the matter.