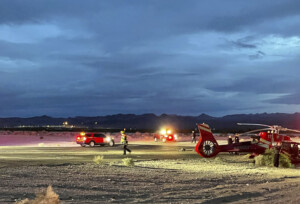 This image provided by Boulder City communications manager Lisa LaPlante shows a Grand Canyon tour helicopter after a Tuesday, Dec. 27, 2022, crash described as a “hard landing” at Boulder City, Nev., Municipal Airport. Officials say the pilot and six passengers were taken to Las Vegas-area hospitals with injuries that were not life-threatening. (Lisa LaPlante/Boulder City via AP)

Local responders and the National Transportation Safety Board characterized it as a “hard landing” around 4:30 p.m. Tuesday at Boulder City Municipal Airport, while the Federal Aviation Administration called it a crash while landing.

A photo posted on Facebook showed the red helicopter upright in a flat desert area. There were no reports of a fire.

The pilot and six passengers were taken to hospitals in Las Vegas and suburban Henderson for treatment of injuries that Boulder City spokesperson Lisa LaPlante called not life-threatening.

The FAA said it is investigating, and the NTSB identified the operator of the Airbus Helicopters EC130 T2 as Las Vegas-based Papillon Grand Canyon Helicopter air tours.

Papillon representatives did not immediately respond Wednesday to a telephone message.

FlightAware, an air traffic database, reported that the 25-minute flight originated at the Grand Canyon near Kingman, Arizona, and was headed for the Boulder City airport. Boulder City is a 30-minute drive from downtown Las Vegas.

NTSB spokesperson Peter Knudson said a preliminary report should be available within about three weeks.