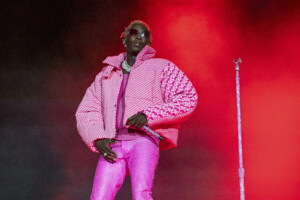 FILE – Rapper Young Thug performs on Day 4 of the Lollapalooza Music Festival, Aug. 1, 2021, at Grant Park in Chicago. Young Thug, accused by prosecutors of cofounding a criminal street gang responsible for violent crimes and using his songs and social media to promote it, is set to go to trial starting Monday, Jan. 9, 2023. (Photo by Amy Harris/Invision/AP, File)

ATLANTA (AP) — Rapper Young Thug, accused by prosecutors of co-founding a criminal street gang responsible for violent crimes and using his songs and social media to promote it, is set to go to trial starting Monday.

The Atlanta-based artist, whose given name is Jeffery Lamar Williams, was charged along with more than two dozen other people in a sprawling indictment last May, with more charges added in a second indictment in August. Fellow rapper Gunna, whose real name is Sergio Kitchens, was also charged.

Young Thug, 31, began rapping as a teenager and has become tremendously successful — performing around the world and starting his own record label, Young Stoner Life or YSL, where he serves as CEO. Artists on his record label are considered part of the “Slime Family,” and a compilation album, “Slime Language 2,” rose to No. 1 on the charts in April 2021.

He co-wrote the hit “This is America” with Childish Gambino, which became the first hip-hop track to win the song of the year Grammy in 2019. His hits, including “Stoner” and “Best Friend,” feature his squeaky, high-pitched vocals.

But prosecutors say YSL also has a darker connotation — a violent street gang called Young Slime Life founded by Young Thug and two others in 2012 and affiliated with the national Bloods gang. The alleged gang members named in the indictment are accused of committing violent crimes — including murders, shootings and carjackings — to collect money for the gang, burnish its reputation and expand its power and territory.

The indictment includes rap lyrics that prosecutors allege are overt acts “in furtherance of the conspiracy,” including a line from a song they say Young Thug released on YouTube: “I’m in the VIP and I got that pistol on my hip, you prayin that you live I’m prayin that I hit.” Another of his lyrics quoted in the indictment says, “I never killed anybody but I got something to do with that body.”

The original indictment charged 28 people with conspiracy to violate Georgia’s Racketeer Influenced and Corrupt Organizations, or RICO, law and also included other charges against many of them. Fourteen of them are set to proceed to trial, which starts Monday and is expected to last months.

Eight others, including Gunna, have already taken plea deals in the case, and six — four of whom don’t have lawyers and two who haven’t been arrested — will be tried later, The Atlanta Journal-Constitution reported.

The August indictment accuses Young Thug of racketeering conspiracy and participation in criminal street gang activity, as well as drug and gun charges.

One of 11 siblings with six children of his own, Young Thug has deep roots in his native Atlanta and works tirelessly at his art and other legitimate, lawful business ventures, his lawyers said in a May court filing that unsuccessfully sought his release on bond.

Attached to that filing were letters from more than a dozen music industry executives who have worked with Young Thug. They describe him as one of the most successful hip-hop artists in the world, a dedicated father and friend, a generous contributor to his community and a nurturing mentor to other artists.

In addition to specific charges, the August indictment includes a wide-ranging list of 191 acts that prosecutors say were committed between 2013 and 2022 as part of the alleged RICO conspiracy to further the gang’s interests.

Included in that list is an allegation that Young Thug threatened in July 2015 to shoot a security guard who was trying to get him to leave an Atlanta-area mall. On numerous occasions, he and others are alleged to have possessed various illegal drugs that they intended to distribute.

Gunna pleaded guilty last month to one count of conspiracy to violate the RICO Act, entering an Alford plea, which means he maintains his innocence but recognizes that it’s in his best interest to plead guilty.

He said in a statement released by his lawyers that when he became affiliated with YSL in 2016, he did not consider it a “gang,” but rather “a group of people from metro Atlanta who had common interests and artistic aspirations.” Gunna also stressed that he has not cooperated or agreed to testify for or against any party in the case.

In court, before the judge accepted the plea, when a prosecutor said that YSL is a music label and a gang and that Gunna had knowledge that its members or associates had committed crimes in furtherance of the gang, Gunna responded, “Yes, ma’am.”

He was sentenced to five years with one year commuted to time served and the balance suspended. He also must testify truthfully if called by any party in the case and must do 500 hours of community service, including talking to young people about the “hazards and immorality of gangs and gang violence.”

The other two alleged co-founders of the YSL gang — Walter Murphy and Trontavious Stephens — also each pleaded guilty last month to one count of conspiracy to violate the RICO Act. Murphy was sentenced to 10 years, with one year commuted to time served and nine years of probation. Stephens also got 10 years, with two years commuted to time served and eight years of probation.