RALEIGH, N.C. (AP) — North Carolina’s elected state auditor apologized Monday for leaving the scene of an accident last month after she drove her state-owned vehicle into a parked car, calling it a “serious mistake” and adding she would continue at her job. 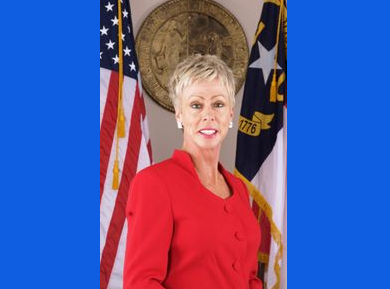 In a statement released days after the two charges against her became public, Auditor Beth Wood said the collision happened when she left a holiday gathering where she had been for about two hours the evening of Dec. 8. She was cited by Raleigh police four days later for a misdemeanor hit-and-run and another traffic-related charge. A Wake County court date is scheduled for Thursday.

“I made a mistake in judgment on December 8, but I am committed to continuing to perform my duties with the same energy and determination I am known for,” said Wood, a Democrat first elected to the auditor’s post in 2008. Her position is next on the ballot in 2024.

No one was hurt in the accident, which she said occurred when she “made a sharp right turn and inadvertently hit a parked car.” Wood, 68, was driving her state-assigned vehicle, a 2021 Toyota Camry. Photos and 911 calls reported on by media outlets show that part of her car was on top of the parked vehicle.

“I was shaken by the incident and, when I was unable to move my vehicle, I left the scene,” Wood said in the written statement, her first comments since the charges were revealed. “That was a serious mistake and I regret my decision.”

The state auditor, one of 10 members of the North Carolina Council of State, performs financial reviews of state agencies, as well as performance audits and other studies sought by the General Assembly.

Sam Chan, a spokesperson for Democratic Gov. Roy Cooper, said in a written statement that Wood’s collision “was a troubling incident and the Governor is glad that the Auditor has addressed it publicly.”

“There’s an investigation and court proceeding going on and he believes it’s appropriate for that to proceed,” Chan said.

The state Republican Party said in a social media post that Wood should resign her position because leaving the scene “was intentional and wholly unbecoming of an elected official.”

Raleigh police accused Wood of hit-and-run — leaving the scene and property damage — and for an unsafe movement infraction, court records show. Someone without a previous criminal record would face no active jail time for a hit-and-run misdemeanor but could face probation. An unsafe movement count can be punishable by a fine. Wood said she was continuing to cooperate with law enforcement. Monday’s statement said Wood wasn’t available for media interviews for now.

The court citation says there was probable cause to believe Wood operated the vehicle and failed to provide her name, address and other information. It also appears Wood operated a vehicle while “failing to see before turning from a direct line that such movement could be made in safety,” the citation reads.

Chris Valverde, the owner of the parked car, said his daughter had borrowed the car the evening of the collision to work at a downtown restaurant.

“I get a phone call from my daughter (who) “literally … says ‘There’s a car on top of the car,’” Valverde told WRAL-TV late last week. Wood said Monday she apologizes to Valverde, “my staff and all I serve for leaving the scene of the accident.”

Wood said Monday that she contacted the state government’s motor fleet management office the day after the collision. An “automotive loss report” filed Dec. 12 and provided by the state Department of Administration described damage to the front passenger side of the vehicle and panel damage.

The report said Wood was traveling at 15 mph when the collision occurred and was neither using a mobile device nor reaching for anything.