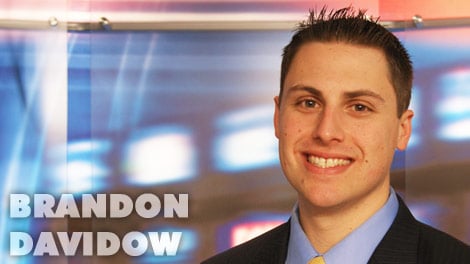 Sports Director Brandon Davidow has been anchoring and reporting at WCCB Charlotte since February of 2013.

He co-hosts Got Game on Sunday, and anchors sports on WCCB News at 10 from Monday- Thursday.

Brandon has enjoying covering some of the most talked about sporting events during his time in the Queen City: the Panthers in Super Bowl 50, North Carolina in the NCAA Men’s Championship Basketball game, NASCAR at Charlotte Motor Speedway, & golf at Quail Hollow Club.

The Philadelphia-area native’s TV career started in the summer of 2007 at KXXV-TV in Waco, Texas. He began as the Weekend Sports Anchor, and was later promoted to Sports Director. During his stay in the Lone Star State, he covered such stories as the rise of Robert Griffin III from high school QB to Heisman Trophy winner, emotional high school football games being played just days after the Ft. Hood shootings, and the Baylor Men’s and Women’s Basketball teams journey through the NCAA tournament.

After his time in Texas came to a close, Brandon also worked at WPSD-TV in Paducah, Kentucky, before heading to Verizon FiOS 1 in Rye Brook, NY. In between TV gigs, he also worked as a Personal Trainer in New Jersey.

Brandon is a proud alumnus of La Salle University in Philadelphia, where he earned a Bachelors Degree in Communication. He graduated in 2007, with honors. Brandon spent most of his days either in the City of Brotherly Love covering sporting events, or working at La Salle TV’s studio.

Some of his most memorable moments at La Salle include interviewing legendary Phillies and NFL broadcaster Harry Kalas, and the implosion of Veterans Stadium (former home to the Eagles and Phillies). He also had the opportunity for three amazing internships: logging Long Track Speed Skating at 2006 Torino Winter Olympics, working for Best Week Ever at VH1 in New York City, and the television shopping network, QVC!

When Brandon is not out covering the latest sports in the Charlotte area, he is enjoying living in the South with his college sweetheart, Megan. They also attempt to wrangle their three kids, Alexis, Luke, and Jacob.

If you would like to challenge Brandon in Fantasy Football or Baseball, a wiffle ball home run contest, or a half court shooting challenge, all you need to do is ask!

Brandon and Rance debate the best and worst Running Backs.

"Ain't Too Proud: The Life & Times Of The Temptations"