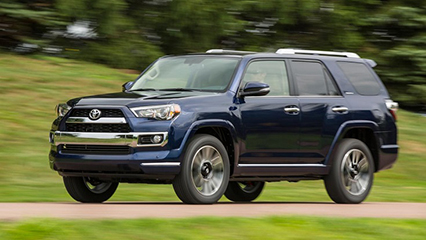 If you’re an adventurous driver who likes to travel on roads that aren’t worn down, or paved, then you might be interested in test-driving the 2014 Toyota 4Runner in N Charlotte. Why? Because this SUV has recently been given an award from the Active Lifestyle Vehicle Awards program!  This program called this Toyota the Best Value Off-Road Vehicle, and was particularly impressed with its:

If you think that you’re going to want to head out on your off-road adventure in the near future, then you’ll definitely want to slip behind the wheel of this tough Toyota to explore its capabilities!

What is it about this new Toyota in N Charlotte specifically that makes it such a great choice to take off-road?

Did you know that there’s also more than one trim-level available for drivers to choose from if they’re thinking about taking home the new Toyota 4Runner near Charlotte? With three different trim-levels available, finding the exact option that has the features and capabilities you’re looking for isn’t a problem. Since the Toyota Star Safety System is also a standard feature in every new Toyota, you can begin every trip with confidence and peace of mind!

Find out what the new Toyota 4Runner is capable of!

If you plan on hitting the less-driven trail often, then it’s important to know that this Toyota is more than capable of keeping up with the adventure you have planned. With the ability to feature rear-wheel drive and also the option of part-time four wheel-drive available with some trim-levels, you can be ready to tackle any road with confidence. Special suspension ensures that every drive can be smooth and enjoyable, too.

Want to explore this tough SUV for yourself to experience its features and what it’s capable of? Stop by and visit our location at 13429 Statesville Road to take it out for a test-drive! You can also call our Internet Sales Team at (888) 883-3797 to speak with one of our team members today!