Find out how the Toyota 4Runner in N Charlotte came to be so popular! 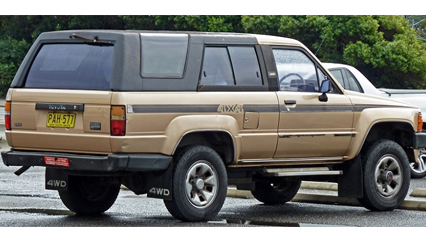 If you’re thinking of taking home a tough Toyota that can handle off-road adventures, and also offer luxury and comfort, then you’re probably looking at the Toyota 4Runner in N Charlotte! This popular Toyota SUV is one of the top off-roading options on the market right now, but it also comes with plenty of other comfort and luxury features to enjoy.

With options like leather details, tough towing capabilities, and hi-tech features like the Toyota Entune System, there’s little this new Toyota in N Charlotte can’t handle! However, it didn’t start off looking like it does today. We examined the 30 years of history behind this tough Toyota SUV to find out how it came to be so popular!

This new Toyota SUV in N Charlotte started off like a truck!

New Toyota trucks near Charlotte are pretty popular, and they were part of the inspiration behind the first generation of the Toyota 4Runner.

The second generation arrived quickly and made an appearance in 1989. It received changes that made it more of a family-vehicle, but it still had tough capabilities! Four-doors made it a more accessible and family-friendly option, and extra luxury features were also installed like a sunroof, leather seats, and even a CD audio system (which is pretty impressive considering when it was made!).

The design of the third generation, introduced in in 1995, was focused on comfort on safety. This helped make it more popular than ever before (sales rose by 30 percent!).

After the new millennium, the fourth generation of the N Charlotte Toyota 4Runner became available for drivers to enjoy around 2002. A larger body style and choice of a V8 engine made it more prominent and powerful choice than ever before. Drivers who wanted complete control on the road would be sure to enjoy the performance this Toyota SUV had to offer too. With 270 hp and 330 lb-ft of torque, there seemed to be little this ride couldn’t handle!

Get to know the 2014 Toyota 4Runner in N Charlotte today!

The fifth generation made its appearance in 2010, and a few more key changes were introduced. Since drivers are more concerned with gas prices and fuel economy, this Toyota was re-made to meet these preferences. A more fuel efficient V6 engine was installed, but it didn’t limit its off-road capabilities or driving performance!

The 2014 Toyota 4Runner is able to handle a lot without kicking comfort or style to the curb. If you need a versatile ride that can handle highway driving and rugged terrain, all while towing cargo and keeping multiple passengers comfortable, then you’ll definitely want to take this new Toyota out for a spin!