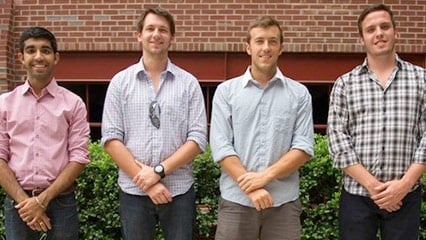 Rape is not just a concern for women but a societal issue that affects the families and friends of the victims. Four male students from N.C. State are contributing to the effort to reduce sexual assaults with a new nail polish that they hope will be an aid to women in the fight against sexual assaults.

The students Stephen Gray, Ankesh Madan, Tasso Von Windheim, and Tyler Confrey-Maloney have developed a nail polish, cleverly named Undercover Colors, that changes shades when it interacts with the drugs Rohypnol, Xanax, and GHB. According to the description on their Facebook page, to test for the drugs women simply need to stir their drinks with their finger. The creators of Undercover Colors hope that the nail polish will not only detect the presence of date rape drugs, but also be a deterrent to would be predators. Undercover Colors Facebook profile further explains their initiative.

“Through this nail polish and similar technologies, we hope to make potential perpetrators afraid to spike a woman’s drink because there’s now a risk that they can get caught.”

To learn more about Undercover Colors or to contribute to their research go to https://www.facebook.com/undercovercolors/timeline