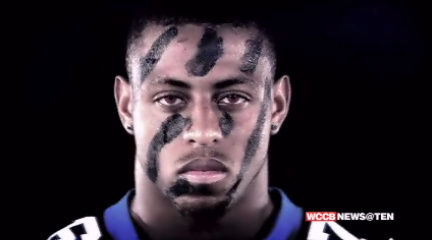 The former Carolina Panther’s status is clouded by his off-field issues and his spot on the NFL’s exempt list.

Despite the possibility of a suspension next season, the 2013 Pro Bowler has teams reportedly showing interest in him.

“There’s nothing to prevent a player on the exempt list without a contract from signing a new one,” league spokesman Greg Aiello wrote Thursday in an email to The Associated Press.
How long he remains a free agent depends a lot on how long it takes for the league to reinstate him.
“Greg Hardy is one of the top defensive ends in the league. He’s an impact player in an impact decision,” said Marty Hurney, former General Manager of the Carolina Panthers.
Hurney points to the stats. Hardy had a combined 26 sacks in 2012 and 2013.
His 15-sack 2013 season resulted in a Pro Bowl nomination and the nickname, “The Kraken.”
But the 26-year-old defensive end played in just one game last season. The Panthers still paid him about $13 million.
In just a few hours of free agency, there were reports that the Indianapolis Colts, Tennessee Titans, San Francisco 49ers, Seattle Seahawks and even the defending Super Bowl champs–The Patriots–are reportedly showing interest in Hardy.
“I would ask him to explain what happened. Say, there’s a lot of questions here… walk me through it,” said Hurney.
A judge dismissed domestic violence charges against Hardy in February when his ex-girlfriend didn’t show up for his jury trial.
Hurney says any team that shows interest would do its own investigation.
“It’s a gut decision. That’s why you have to spend time with him and spend time with people around him to get a feel for whether you can count on him to represent your organization,” said Hurney.
The NFL is still investigating Hardy’s domestic violence accusations.
The league could still suspend him for six games even after he’s reinstated.