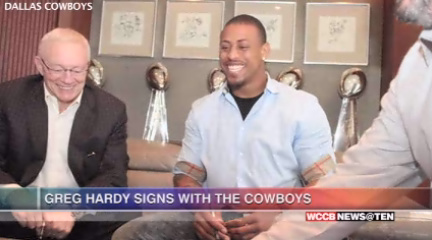 CHARLOTTE, NC — The Dallas Cowboys have signed former Carolina Panther Greg Hardy.  But with the NFL’s new lawsuit filed against Mecklenburg County District Attorney Andrew Murray (read more here), it may be a while before the league decides on any punishment for Hardy.  But the Cowboys were not willing to wait.

After the former Panthers defensive end passed a physical for the team Wednesday morning, Cowboys owner Jerry Jones and Hardy made it official, putting ink to paper on a one-year deal that could be worth up to $13.1 million, the same amount Hardy made last year for playing in just one game for the Panthers.

Several incentives are built into the Kraken’s new deal–the reason Foxsports.com writer Brett Jensen says it’s a low-risk contract with a potential of high reward for the Cowboys.