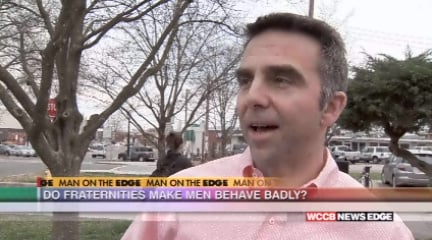 Despite roots in philanthropy and brotherhood, a recent spat of inappropriate behavior on college campuses across the country has many people taking a second look at what some fraternities really stand for.

The latest fraternity fallout: a tragic death at the University of South Carolina.  Pi Kappa Alpha is now on administrative suspension following the death of a student Wednesday morning.  Sigma Chi at the University of Houston and Chi Phi at UW Madison are also in the news, both suspended after allegations of hazing.

And on Tuesday, Kappa Delta Rho at Penn State was accused of taking pictures of women who police say were at least partially nude while sleeping or passed out.  Police say the men posted those photos to a private Facebook page, sharing them with about 150 other men.  And last week, Sigma Alpha Epsilon at the University of Oklahoma came under fire after a video surfaced showing fraternity members yelling a racist chant.

And that brings us to our Question of the Night: Do fraternities make men behave badly?  Rance Adams took the question to the streets…