Search is on for Man Who Flashed Woman at CLT Park 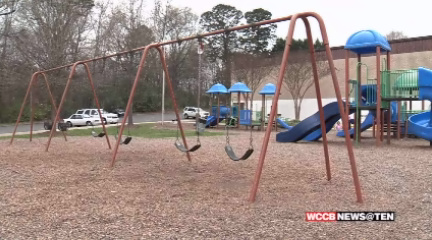 CHARLOTTE, N.C. – No sign of anything suspicious at the Methodist Home Rec Center in east Charlotte Wednesday. But the day before, a guy exposed himself to a woman and ran off.

It happened around 1:45 in the afternoon, near a brick wall of the rec center off Shamrock Drive, just out of the range of security cameras and just feet from a children’s playground.
The woman went inside immediately and asked a worker to call the police. The victim describes the flasher as a black man, about 25 years old, 5’5″, 150 pounds. He was wearing rust colored jeans and a grey or black shirt.
Mom Crystal Welsh says she brings her daughter to the park nearly every day. “If I ever see it with my own eyes personally, I wouldn’t bring her over here anymore, and now that I know, I am not gonna take my eyes off of my baby,” she tells WCCB Charlotte.
CMPD tells us it’s stepping up patrols in the area. We didn’t see any cruisers during the more than two hours we were at the park. No one at the Eastway Division office was able to talk with us on camera about the investigation, but a sergeant did say if this sort of thing ever happens to you, you should call 911 right away.
East Charlotte resident Destiny Daniels comes to the park to hang out with her friends. She says she’s a little hesitant now, knowing the flasher could come back. “I’m a little taken aback because it’s just kinda rude and really disrespectful to flash a lady,” and “I feel really sorry for the lady it happened to.”
Usually, it’s anyone’s guess why flashers do what they do. In this case, we have an idea why it happened. We’re told the woman met the guy Monday during an attempt to sell him some audio speakers. When she saw him at the park Tuesday, she approached him, apparently the deal went bad, and that’s when he flashed her.