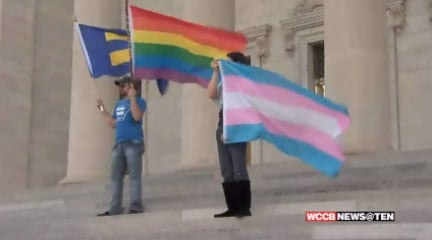 INDIANAPOLIS, IN — Indiana has its first protections based on sexual orientation.  They are part of a re-worked religious freedom bill signed Friday by that state’s governor.

The original bill caused national outrage.  Businesses, groups, and sports teams threatened to boycott Indiana, saying the law would discriminate against gays.  The re-worked version stops businesses from using the law as a defense in court for refusing customers based on things like race, religion, age sexual orientation and gender identity.  The law is expected to take effect July 1

Arkansas Governor Asa Hutchinson has signed an amended version of his state’s religious freedom bill.  He asked lawmakers to change the wording to make the law similar to the federal Religious Freedom Restoration Act.  Critics say the original version would discriminate against same-sex couples.

A religious freedom bill proposed here in North Carolina is apparently on hold because of the backlash in Arkansas and Indiana.  It was introduced last week by state representatives Dan Bishop and Jacqueline Michelle Schaffer, both Republicans representing Mecklenburg County.  Earlier this week, Republican Governor Pat McCrory said the bill didn’t make sense and he would not sign it if it made it to his desk.