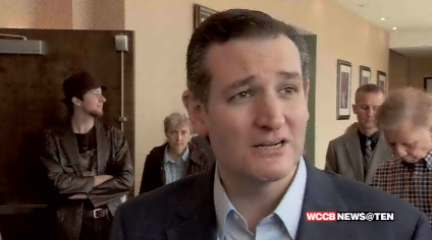 ROCK HILL, NC — The race for the White House in 2016 officially made its way to the Carolinas.  Texas Senator Ted Cruz held a town hall meeting in Rock Hill Friday.  The York County Republican Party hosted the event.

Cruz is the first candidate from either party to launch a Presidential campaign.  Today he answered questions from Rock Hill residents and discussed why he plans to visit the Palmetto State several more times before election day.

“Heidi, I and the girls are going to spend a lot of time here in South Carolina.  As a Texan, Texas and South Carolina share a lot in common, a lot of common values, cultural similarities.  We’re Southern states, we’ve got tremendous love of our liberty, of our gun rights, of our military, and of our Constitution.”

Cruz is still waiting to hear who will challenge him for the GOP nomination.  Florida Senator Marco Rubio plans to make a big announcement  later this month.  Many suspect he’ll announce his Presidential campaign.