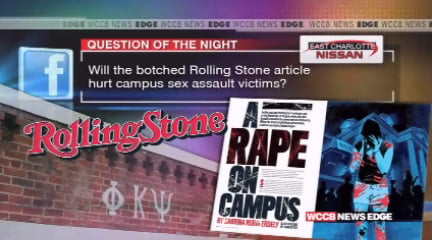 No one fired, no one suspended, no one disciplined at all after a scathing Columbia University review found systemic failures in Rolling Stone’s reporting of an alleged gang rape at a University of Virginia fraternity.

An extensive review of the now-retracted “Rape on Campus” article found… “Editors mistakenly invested Rolling Stone’s reputation in a single source–the alleged victim, Jackie.”  The review went on to say that the reporter, Sabrina Erdely did not interview Jackie’s friends who would have contradicted her account.  And ultimately, the frat did not even hold a party on the night Jackie claimed.

That fraternity, Phi Kappa Psi, announced Monday that it will pursue a lawsuit against Rolling Stone over its reporting.

Speaking to the Washington Post, the Rolling Stone’s top editor said, “Sabrina has done great work for us over the years, and we expect that to continue.”

And that brings us to our Question of the Night: Will the botched Rolling Stone article hurt campus sex assault victims?