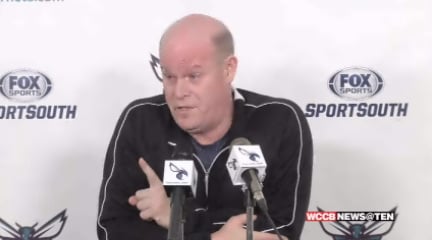 CHARLOTTE, N.C. (AP) Al Jefferson says he has no intentions of opting out of his contract with the Charlotte Hornets, while Gerald Henderson hasn’t decided on whether he’ll return next season.
Jefferson is due $13.5 million next season. Henderson, the longest-tenured player on the roster, is set to make $6 million.
Both have opt-out clauses in their contracts.
Jefferson says he has unfinished business to address after a disappointing injury-plagued season. Charlotte finished with the ninth-worst record in the league (33-49) after making the playoffs in 2014.
Jefferson said Thursday “I have a bad taste in my mouth, the Charlotte Hornets have a bad taste in their mouths _ and I can’t walk away from that.”
The 6-foot-10, 287-pound Jefferson plans to get in better shape, hoping to lose 20-25 pounds this offseason.