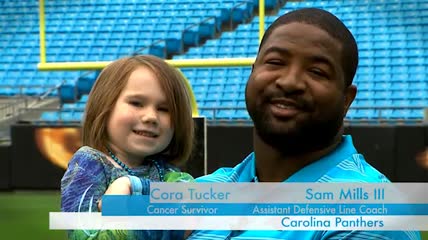 The Keep Pounding 5k will take place Saturday, May 9, at 8 a.m., starting at the bottom of Morehead Street near Carolinas HealthCare System’s Levine Cancer Institute and finishing on the field at Bank of America Stadium and will be MC’d by WCCB News Rising’s Kaitlin Cody.

The Keep Pounding 5k is a unique event featuring a mostly uphill course that begins on Morehead Street and finishes inside Bank of America Stadium “where the big cats play.” WCCB has been the media partner for this event since its inception!

The Keep Pounding 5K Stadium Run, the only charitable run that uses the home of the Carolina Panthers as its course, is one-of-a-kind experience that includes ascending the Bank of America Stadium pedestrian ramps to the 500 level concourse followed by a challenging descent to field level.

Sir Purr, TopCats, and Levine Children’s Hospital patients will cheer on participants as they run though the cathead and cross the finish line by the 50 yard marker. The new and improved sound system and PantherVision video displays will be used during the event. Participants will find themselves on the jumbotrons as they run out onto the field, just like a Carolina Panther.

Friends and family are encouraged to attend and show their support in the fight against pediatric cancer.

Registration is currently open at KeepPounding5K.org
or at Charlotte Running Company in Dilworth.
Space is limited, so register today!

Keep Pounding – The Panthers have a history of supporting Carolinas HealthCare System’s cancer programs through Keep Pounding – a campaign established in 2004 to honor former players Sam Mills and Mark Fields, who had both been recently diagnosed with cancer.

Each year in the United States, 10,000 children are diagnosed with cancer – and locally, more than 400 of these newly diagnosed patients will be treated at Levine Children’s Hospital.

Carolinas HealthCare System’s Levine Children’s Hospital is a 234-bed hospital in Charlotte, North Carolina, located on the main campus of Carolinas Medical Center.  It is the most comprehensive facility of its type between Atlanta, Georgia and Washington D.C.  Levine Children’s Hospital is also home to the Ricky Hendrick Centers for Intensive Care, which support pediatric intensive and cardiovascular surgery patients.  Just seven years after opening, the hospital has grown to include more than 40 pediatric specialties and has received national recognition from U.S. News & World Report as one of “America’s Best Children’s Hospitals” in six different categories.