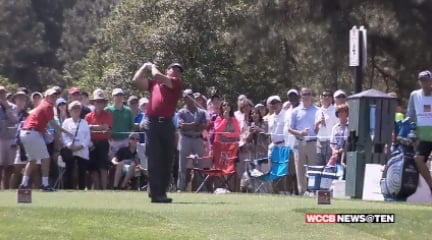 CHARLOTTE, N.C. (AP) — Robert Streb shot a 7-under 65 on Thursday to take a one-shot lead over Patrick Reed and Kevin Chappell after the first round of the Wells Fargo Championship.

Stewart Cink topped the six-player group at 67.
Top-ranked Rory McIlroy appeared on the verge of making a late run at the leaderboard before making a double bogey on the difficult par-3 17th hole. McIlroy appeared stunned when his tee shot hit the rock wall in front of green and his ball caromed high into the air and into the water. He finished with a 70.
Phil Mickelson had his troubles too after a fast start. Mickelson opened with three birdies, but made a double bogey on the 18th hole. He shot 71, leaving him six shots back.