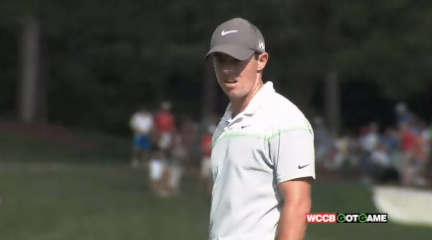 CHARLOTTE, N.C. (AP) _ Rory McIlroy shot an 11-under 61 on Saturday to break the Quail Hollow record and take the third-round lead in the Wells Fargo Championship.

McIlroy set the previous record of 62 in his 2010 victory, and Brendon de Jonge matched it last year.
Needing to birdie the final two holes for a 59, the top-ranked McIlroy closed with two pars.
McIlroy started the day three shots behind Webb Simpson and Robert Streb, and had five birdies in a front-nine 31. He didn’t let up on the back, birdieing six of the first seven holes.
In all, he had nine birdies during a 10-hole stretch.
The highlight of the day came when McIlroy drove the green on the 345-yard, par-4 14th hole for the fourth time in his career _ more than any player in tournament history.
McIlroy is looking to become the first two-time winner of the event. At 18-under 198, he’s on pace to shatter the tournament record of 16 under set by Anthony Kim in 2008.
Simpson was second, four strokes back after a 68.