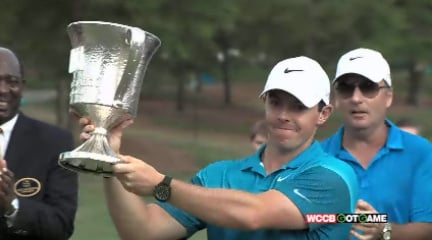 The top-ranked McIlory closed with a 3-under 69 to finish at 21-under 267, shattering the tournament record by five strokes. He entered Sunday with a four-stroke lead over Simpson after a course-record 61 on Saturday.
Rodgers, playing on a sponsor exemption, was the only player to mount a serious challenge, getting within three shots after a birdie at No. 15. He finished with a 68, and Simpson shot 72.
It is McIlroy’s second victory in the past three weeks and his 11th on the PGA Tour. He won the Match Play Championship this month in San Francisco.
He has six top-10 finishes in his last eight PGA Tour starts.