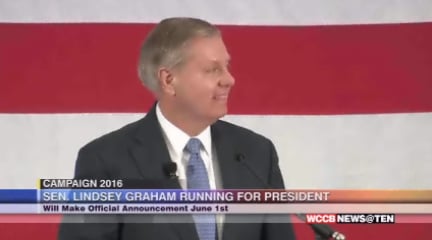 COLUMBIA, SC — South Carolina Senator Lindsey Graham is running for President.  He says the world is falling apart, and he can keep Americans safer.

The Republican Senator will officially announce his Presidential bid on June 1st in South Carolina.  He has already traveled to several early primary states.  Graham says one of his top Presidential goals would be finding a way to stop ISIS.

“If we don’t put ISIL on the run and disrupt their operations, they’re gonna hit us here at home,” said Senator Graham.  “So it’ll take thousands of American soldiers over there to protect millions of us here at home.”