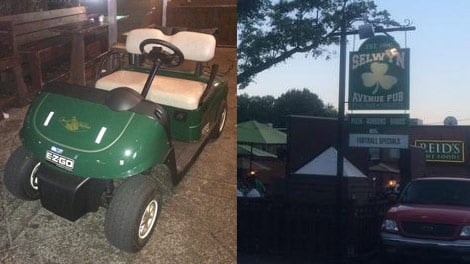 CHARLOTTE, N.C. — A golf cart belonging to the Quail Hollow Country Club was reportedly stolen and taken to a popular bar.

Two unidentified men stole the golf cart on the last day of the Wells Fargo tournament and ditched it at Selwyn Pub. Jim Foster, the owner of the pub, said that the two men got out of the cart, high-fived each other, and ordered drinks.

Debbie Meyers was eating at Selwyn Pub and reported that the men made a dash from the bar before anyone could find out their names.

The shortest route to the bar from the tournament is around five miles long, taking Gleneagles Road to Park Road to Selwyn Avenue.

“I don’t know how they made it that far from Quail Hollow all the way over to Selwyn without anyone seeing them,” Meyers said.

Quail Hollow Country Club has not made a statement on the incident and a police report has not been filed.