The Edgeitators: Should Corporal Punishment Be Allowed In Schools? 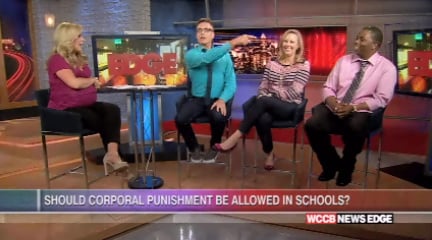 A substitute teacher in Maryland has been removed from the classroom after a video surfaced showing him using a belt on students.  In the video, the teacher is seen whipping the students on the floor, who appear to be fighting.  The school system says law enforcement is now involved.  No word yet on whether or not the teacher will face charges.

North Carolina is one of 19 states that still allows paddling in schools, with nine school districts using some sort of corporal punishment.  There’s no law against it in North Carolina.  Still, the debate centers around whether or not it’s effective.

So what do you think?  Should corporal punishment be allowed in schools?  The Edgeitators battle it out…