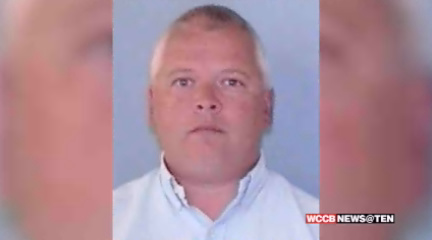 LINCOLNTON, NC — An undercover child predator sting spanning counties around the state led to the arrest of a local teacher and coach.
Parents know the man as Jason Scott Webb, the South Point High School soccer coach, English teacher and a father.
Lincolnton Police accuse him of being a man on a mission to meet a teenager for sex.
“You never know where it’s going to hit at church or school,” said one parent, Nicole Gotti. “It’s one of those things as a parent you have to make your child aware.”
Police say Webb met who he thought was a 14-year-old girl online.
Eventually, police say he skipped school, drove to Lincolnton with marijuana only to find Detective Brent Heavner.
“I wasn’t surprised,” said Det. Heavner.
He’d already arrested 16 men in the undercover operation, many who held jobs that require trust or deal with children.
“We’ve even got former police officers, we’ve got firemen, we’ve got juvenile sex offender counselors,” said Det. Heavner.
The first sting is over, but the investigation isn’t.
“We’ve got 17, but there’s hundreds right around us right now that we are still pursuing,” said Det. Heavner. “And when we identify some of them, they’re going to go to jail.”
Police warn parents to always monitor your child’s internet use, and tell your children to never give out their name or address online.
Police don’t know if this was Webb’s first attempt to meet a child.
They arrested him Wednesday. As of Friday evening, he was still in jail.
“Hopefully this will put our guard up, and we’ll take more precautions in the future,” said Gotti.
She’ll be warning her children.
The Gaston County School District where Webb worked says he’s on paid leave while police investigate.
He faces a charge of soliciting a child for sexual activity by a computer and delivery of marijuana because investigators say he brought the marijuana for the teenager.