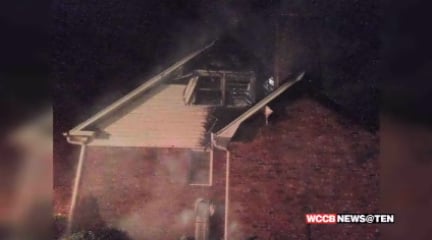 GASTONIA, NC — One of two firefighters injured while fighting flames at a Gastonia house is still in the hospital.

Fire officials say a ceiling collapsed on top of Jamie Weyant and Marco Gonzalez at the home on Courtland Drive Thursday night.  Weyant is still being treated at the Caromont Regional Medical Center.

“You know it’s a risky job, so we have injuries often.  As firefighters enter apparatus, exit apparatus during fires, a lot of times heat exertion and those injuries,” said Gastonia Fire Chief P.B. Welch.

Crews say the fire was started by a cigarette that was thrown into a plastic flower pot.  No one was home at the time of the fire, but several dogs were rescued.