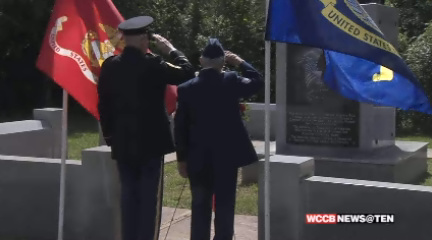 CHARLOTTE, NC — It was a day of remembrance across the United States for Memorial Day.  At Arlington National Cemetery, President Obama and top military leaders honored those who served and died in battle.

At the World War II Memorial, family and friends honored the more than 400,000 Americans who died and more than 16 million who served.

And at the Air Force Memorial, a moment of silence to remember those who passed.

Here at home, people in East Charlotte gathered for a Service of Remembrance at Sharon Memorial Park.  Organizers say they hope to give people a deeper appreciation for military heroes.

“Losing your comrades is not a very good thing.  So this is an opportunity for us to get together, and to pay homage for what they gave and what they left behind,” said veteran Robert Groulx.

Families also gathered for a memorial service at Stumptown Park in Matthews.  The ceremony was organized by members of the Mecklenburg County Veterans Office and American Legion Post 235.

Congressman Robert Pittenger spoke at the event.  He says we can never do enough to honor fallen heroes.

“It’s a very humbling thought to realize that so many caring and sacrificial people have done everything that it took to preserve our liberties,” he said.

The ceremony also included a special remembrance for those missing in action or who died as prisoners of war.