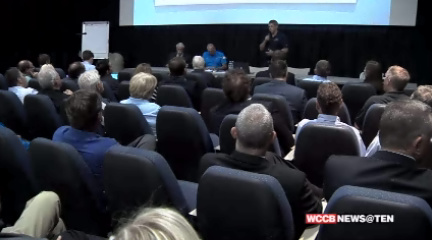 CHARLOTTE, NC — It was standing room only Thursday night as business owners and local leaders met to talk about widening I-77 north of Charlotte.

More than 120 people packed the Transportaion Summit at Michael Waltrip Racing.  They are concerned about the DOT signing the contract to start building toll lanes.  They’re also concerned about not being able to add free lanes over the next 50 years without paying the developer: Spanish company Cintra.

“We got the doom and gloom message last week, but it’s never too late to change your mind, and the earlier we can change our mind and turn this aircraft carrier around, you know we’re going to be heading in the right direction,” said Mac McAlpine, Development Engineer at Michael Waltrip Racing.

McAlpine says the toll lanes will take billions of dollars from the local economy, and says it won’t help ease traffic.  The business owners want local elected officials to pressure the DOT to change its mind.