The Edgeitators: Should NC Reinstate Executions? 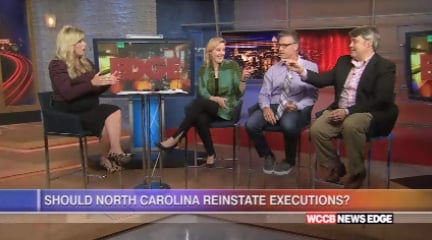 Emmanuel Rangel and Edward Sanchez are each charged with four counts of murder, but the Mecklenburg County DA announced he will not seek the death penalty for any of the suspects.

Death penalty cases have been few and far between in Mecklenburg County and across the state.  North Carolina has not executed anyone since 2006.  And there are currently 149 inmates sitting on death row.  The state legislature is now moving towards ending a moratorium on executions.

And that brings us to the Question of the Night: Should North Carolina reinstate executions?  The Edgeitators battle it out…