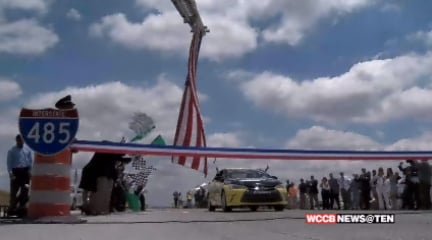 CHARLOTTE, NC – It’s been a long time coming – but the wait is finally over.

Almost 27 years after the project’s 1988 groundbreaking, the final 5.7 mile stretch of I-485 opened Friday around 3pm.

The new stretch in Northern Mecklenburg County connects Old Statesville Road to I-85 and completes the 67-mile loop.

“Some of us even lived to see it happen,” said Governor Pat McCrory.

At Friday’s opening ceremony, instead of cutting the opening ribbon on I-485, Governor Pat McCrory drove through the ribbon.

McCrory says the completion means it’s time to move on to new projects.

“I’m going to go ahead and pitch now for the roads we’ll need for the next 25 years because now we know how long it takes to build a new highway in North Carolina,” said McCrory.