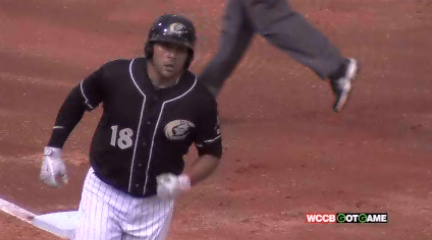 (CHARLOTTE, NC) – A night removed from being shut out 5-0 by the Norfolk Tides, the Charlotte Knights returned the favor, tallying 10 hits in a 6-0 shutout victory to put themselves back into a tie with the Tides for first place in the International League South Division.

Knights starter Scott Carroll entered Saturday night’s matchup with a 1.83 ERA – lowest among Knights pitchers – and left the game with 5.2 more scoreless innings under his belt, lowering his ERA to 1.42 in five games started this season.

The Kansas City native did leave the game with the bases loaded in the sixth inning, but RHP Matt Lindstrom was able to record the final out of the inning with the shutout intact. Lindstrom would go on to spin 1.1 perfect innings in relief of Carroll.

Matt Tuiasosopo gave the Knights an early 1-0 lead with his fourth home run of the season – a solo shot in the bottom of the second inning. The 29-year-old would tally two RBI in the game, one shy of 500 for his minor-league career.

Micah Johnson would reach base with a one-out double in the third inning before Tyler Saladino reached base on a fielding error; the Knights then showed some speed with a double-steal to get a pair of runners into scoring position. The move paid off as Johnson then scored on a Jason Coats RBI-ground out before Tuiasosopo added his second RBI of the game by driving-in Saladino with a single to give the Knights a 3-0 advantage.

The Knights were able take a 5-0 lead in the sixth with Trayce Thompson scoring on a Coats sacrifice fly and Neftali Soto coming home on a Johnson RBI-single.

Saladino would lead-off the bottom of the seventh inning with his second triple of the season, later coming in to score on a Matt Davidson sacrifice fly to push the Knights advantage to 6-0.

RHP Maikel Cleto would relieve Lindstrom in the eighth inning to record the final six outs of the shutout victory. The 26-year-old from Santo Domingo, DR would allow only one hit over 2.0 innings while striking out three Tides.