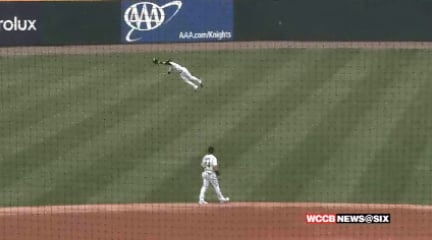 ((Charlotte, NC)): The Charlotte Knights fell to the Norfolk Tides 4-1 in the rubber match of their weekend series as the Tides claim sole possession of first place in the International League South Division.

Tides starter RHP Mike Wright was impressive in his first start since returning from his first-career major-league stint with the Orioles. The East Carolina University product would earn his fourth Triple-A win of the season, scattering four hits over 6.0 innings of one-run baseball while striking out six.

The Tides recorded only one hit through three innings off of Knights starter Kyle Drabek, but four-consecutive hits to begin the fourth frame would lead to a four-run inning to break the scoreless tie. Dariel Alvarez and Henry Urrutia each tallied RBI-doubles in the frame.

The Knights were able to get on the ‘board in the bottom of the sixth inning when Micah Johnson plated Tyler Colvin with a sacrifice-fly to cut the Tides lead to 4-1.

Drabek would be saddled with the loss on Sunday, allowing four runs on seven hits over 6.1 innings pitched. The Texas native had his outing cut short due to rain, with a 20-minute delay coming after Drabek recorded the first out of the seventh inning.

LHP Onelki Garcia would relieve Drabek after the rain subsided, and the lefty would strike out two Tides over 1.2 scoreless, hitless innings.

The Knights would call on LHP Zach Phillips to pitch the ninth inning, and the native of California would deliver a perfect frame to keep the Tides lead at 4-1. The lefty has now tallied six-consecutive scoreless outings since May 23, a span of 6.1 innings pitched.

The Charlotte Knights will now hit the road for a seven-game road trip, beginning with a three-game series in Pawtucket starting on Monday. After the three-game set against the Red Sox, the team will travel to Upstate New York for a four-game series against the Buffalo Bisons. The Knights return to Uptown Charlotte on Tuesday May 16 for a six-game homestand, with three each against the Pawtucket Red Sox and the Indianapolis Indians.