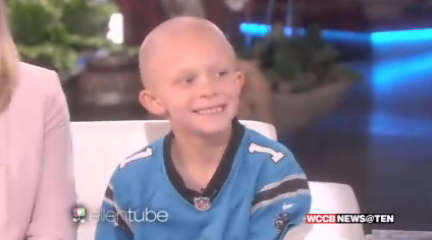 Six-year-old Braylon Beam was given a one-day coaching contract by the team Tuesday.  It came during a surprise pep rally at Rock Springs Elementary School in Denver, North Carolina.

Doctors diagnosed Braylon with brain cancer in February.  Tuesday’s surprise was made possible thanks to the Make A Wish Foundation.

“We’re just overjoyed and overwhelmed at the same time with what’s happened these last couple months," said Braylon’s father Jesse Beam.  "But of course with Braylon inspiring others, we’re at a loss for words and it’s been a trip to remember forever.”

You may remember seeing Beam break it down on Ellen last month.  He will serve as the team’s Honorary Associate Head Coach during Fan Fest on Friday, August 7.